by Erik Fontanez from Bleacher report: 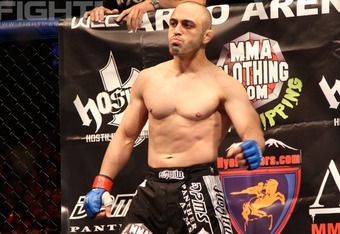 World Extreme Cagefighting is set to make it’s Pay-Per-View debut this weekend with a stacked card full of exciting fights and explosive fighters.

From bottom to top, the card is something one can get anxious for.

It’s not only the fans that are stoked for this card, but also the fighters.

The move from the Versus cable network to Pay-Per-View is a huge turning point for the WEC and could be the beginning of a number of broadcasts for a premium, which translates to bigger purses and larger venues.

One fighter in particular, has seen the grand stage before—that fighter is Manvel “The Anvil” Gamburyan.

During a brief time in the UFC, by way of The Ultimate Fighter reality series, the Armenian born fighter competed in the 155-pound division.

Now, 10 pounds lighter, Gamburyan fights in the WEC’s featherweight division and has won both his fights since making his debut in the organization 10 months ago.

Bleacher Report MMA was recently able to sit and talk with Manny about his fight and how big of an impact it is for the WEC to move to PPV.

“It’s a big move, bro,” said Gamburyan. “I’m proud of them, you know? It’s was their goal. They got a lot of good fights out there like myself and Brown, Donald Cerronne and Ben Henderson in the main event. I’m a big fan of the sport, also. I really want to see Jose Aldo against Urijah Faber. It’s going to be fireworks.”

Gamburyan is scheduled to go against former featherweight champ Mike Brown; a tough test for any 145-pounder.

You think someone with a name like “Anvil” feels pressure going into the promotion’s first Pay-Per-View against such tough opposition?

“First of all, there is no pressure in my fights. I just look at a fight. Any fight is a fight, you know? I can’t take anything away from Brown. He’s a gamer. I respect him as a person. Right now he’s my enemy, but it doesn’t mean he’s a bad guy.”

What Manvel has over all the other combatants on this card is that it coincides with an anniversary that is close to his heart.

April 24th is Genocide Remembrance Day for the Armenian community and this adds additional fuel to the fire that burns inside of Manny Gamburyan.

“It’s a special day for me,” said Manny when talking about what it means to compete on this particular date. “Do or die, man. I’m a die out there, bro. I’m a do everything [so] I can win.”

With that win, Gamburyan can be next in line for a shot at the organization’s featherweight title.

Some may say that this fight is used to gauge if Manny is ready for the big show and a shot at the Aldo-Faber winner.

Who would that shot come against?

As far as a preference is concerned, Gamburyan said, “I’d rather fight the unbeatable, Jose Aldo, but my prediction is Urijah Faber, in this one.”

Before he can get to the title fight, Manny will have to get through a tough obstacle in Mike Brown.

The former featherweight champ became the division king be defeating Urijah Faber and successfully defended against “The California Kid” in their rematch.

How does he plan to beat an opposition with such a great track record?

“I’m going to be all over the place; be in his face for 15 minutes,” said Gamburyan about his plan of attack. “I’m working on my wrestling. I got tons of good wrestlers, Olympians, world champions, world class wrestling, big dudes. I got everything at my camp.”

The preparation has the young Armenian pumped and ready for action to the point of systematic annihilation of his opponent.