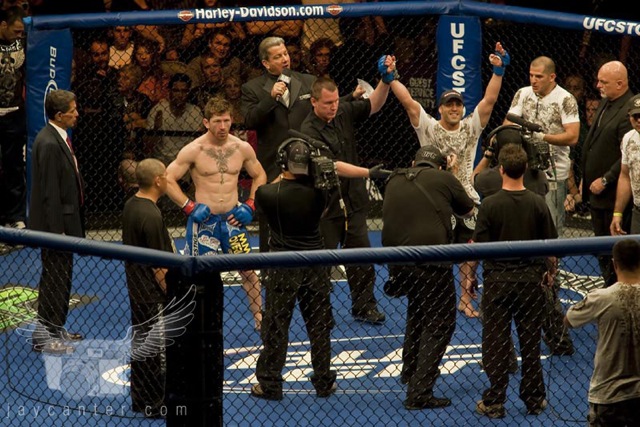 For as long as HyeFighter Manny Gamburyan has been competing professionally, fans and fellow fighters have raved about his judo skills, explosive takedowns and freakish strength. But following his first-round destruction of former WEC featherweight champ Mike Brown, Gamburyan should now get some additional kudos for his striking.

Leading up to the fight – one in which Brown arguably had little to gain and a lot to lose – the ex-champ talked of his need for a win and a desire to reclaim the belt. However, Gamburyan, a former UFC fighter who appeared on “The Ultimate Fighter 5,” is the one who looked like championship material in the main-card bout.

A patient Gamburyan continually circled and remained at a distance in the opening minute of the fight. As Brown engaged, Gamburyan tested his ability to counter. The trial resulted in virtually no error, and just two minutes into the fight, he found his mark and blasted Brown with a perfectly timed counter right. Brown dropped to the mat, and Gamburyan followed with additional punches to force the TKO stoppage at the 2:22 mark of the first round.

“I’m improving,” Gamburyan said. “All I’m doing is improving. … I promised you guys I would do genocide, and I did it.”

Get the Flash Player to see the wordTube Media Player.

all pictures courtesy of Jay Canter: