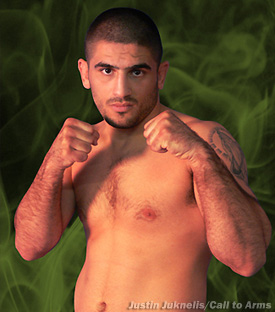 With the WEC’s first pay-per-view event now in the books, the organization has shifted its attention toward its return to Versus in June.

The newest addition to the recently announced “WEC 49: Varner vs. Shalorus” event is a lightweight feature between Karen Darabedyan (9-2 MMA, 1-1 WEC) and Will Kerr (8-2 MMA, 0-1 WEC).

News of the matchup was first reported by FiveOuncesOfPain.com, and MMAjunkie.com (www.mmajunkie.com) has since confirmed the booking with sources close to the event.

Kerr seeks his first WEC win after losing his November debut to Shalorus. A Connecticut-based fighter who fought primarily for the Northeast-based Full Force Productions organization prior to his entrance in the WEC, Kerr saw a five-fight win streak halted with the recent result.

Meanwhile, Darabedyan also looks to rebound after a recent loss. A training partner of WEC featherweight contender Manny Gamburyan, Darabedyan was submitted by Bart Palaszewski in a March matchup. The Californian controlled the action early before falling prey to the hold, and the loss snapped a seven-fight win streak.