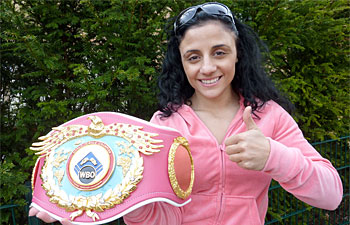 Susi, have you looked at your fight on video yet?

“Yes, that was a very close result. And when I saw it on TV, I admit that Nadia made a super strong impression. But I didn’t feel her pressure in the ring.”

It was not a dominating victory this time – what do you attribute that to?

“In the last year I’ve boxed against four world champions and won four times. That says something about the matter. I wasn’t in top form, which I had expected of myself. Still the win was justified.”

Would you fight Nadia again?

“Of course. Nadia Raoui has earned a rematch. And I’m sure the fans would also like this. But now I have to recharge my battery again. In my life it always goes up and down – up to now that has only made me stronger. So I take the very nasty criticism with mixed emotions. I know I’ll be better next time.”

How do you like the new WBO female belt?

“Cool. I like pink. It looks kind of cute in comparison to the men’s belts. And it’s much more manageable and better suited to my body. Now it’s a lot lighter to carry all three world championship belts.”