Nothing would deter Manny Gamburyan. 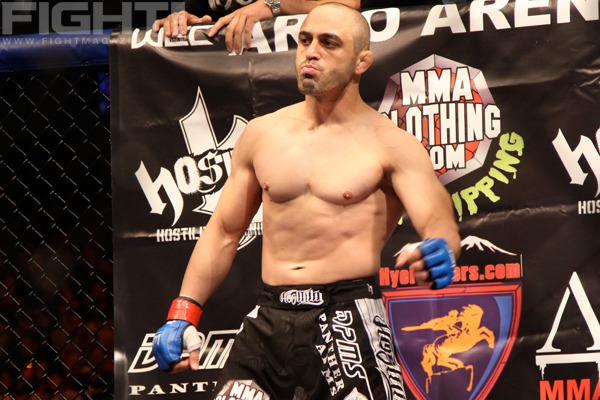 The WEC featherweight told UFC/WEC matchmaker Joe Silva that WEC 48 opponent Mike Brown would have to put him asleep or break a limb to stop the fight. Short of that, there would be no letup, he said.

Gamburyan (11-4 MMA, 3-0 WEC) never came close to that type of danger and stopped Brown cold this past Saturday with a short, powerful right hand that likely set a featherweight title shot in motion.

The 28-year-old Gamburyan was fighting for more than just a victory at Sacramento’s ARCO Arena. April 24 carried special significance to his Armenian heritage. That day marked the country’s remembrance of the 1.5 million Armenians who were massacred under the Ottoman Turk Empire between 1915 and 1917. (Hence, his “genocide” comments in his post-fight interview.)

Gamburyan, a compact sparkplug of a fighter who made his way onto the national MMA stage by appearing on “The Ultimate Fighter 5,” was not about to lose on such an significant occasion.

“I’m an emotional guy,” he told MMAjunkie.com Radio (www.mmajunkie.com/radio) earlier this week. “It was a very sad day for me, but in a way this is revenge. I was looking at Mike Brown as a Turk. ‘So just go out there and just destroy him.'”

It took two minutes and 22 seconds for Gamburyan to stop Brown and seal a $65,000 bonus for “Knockout of the Night.” It was his third consecutive WEC victory and put him directly in line with current champion Jose Aldo, who defeated former champion Urijah Faber in dominating fashion in the night’s headliner.

And while the Los Angeles native is proud that he came through on such an important day, he’s already moved on to the next chapter in his life.

“For me, it’s past already,” he said. “I have to look forward to my next fight right now. It’s Jose Aldo. I look at it that way.”

He’s unmoved by talk of Brown’s personal problems leading up to the fight. It wouldn’t have changed his approach one bit.

“He can have personal issues; I’ve got personal issues also,” Gamburyan said. “I’m from L.A.; I hang out with a lot of girls and this and that. But sometimes I get problems with stupid stuff also, so I don’t know what’s going on with him.

“He said he trained pretty hard. … But if he didn’t, he might have taken (me) lightly. But most definitely, I didn’t take him lightly. I [took] him really serious, and my plan was to finish him off to get a title shot.”

The WEC’s next event is slated for June 20 in Edmonton, Alberta, Canada, and is almost completely booked. But a late summer event, WEC 50, is rumored for Aug. 8, and Gamburyan is open to a meeting with Aldo then.

He’s not intimidated by all the press the Brazilian champion has gotten.

“I’d fight him in Brazil if they want,” Gamburyan said. “If I’m ready, I’m focused, (then) I don’t care where I fight him. We can fight in the backyard.”