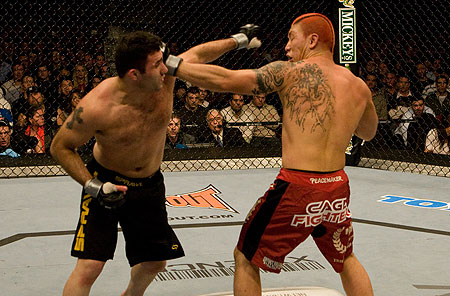 According to a report by Ariel Helwani at MMAFighting.com, Karo Parisyan is currently involved in negotiations with Strikeforce and if the two sides can come to an agreement, the HyeFighter judoka could compete for the organization on their June 16 card in Los Angeles.

Parisyan was let go by the UFC in November amidst a firestorm of controversy. Scheduled to make his return to the Octagon at UFC 106 after serving a nine-month suspension following his fight against Dong Hyun Kim at UFC 94, Karo pulled out on his fight with Dustin Hazelett, citing his recently revealed panic disorder as the reason.

After Parisyan’s withdrawal, UFC president Dana White announced via Twitter that “The Heat” would “not be fighting Saturday or ever again in the UFC!!” and that he didn’t buy Karo’s “laundry list of excuses.”

Up to that point in his career, the 27-year-old welterweight’s  only 2 only UFC losses prior to his publicized bout with anxiety were by decision to Georges St-Pierre and Diego Sanchez.

If the reports are true, we would like to wish Karo Parisyan the best of luck and let him know we, as the Armenian community, are still behind him and support him.