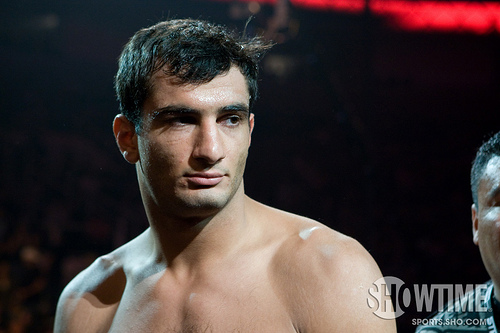 HyeFighter Gegard Mousasi, who will likely fight at DREAM.15 in the light heavyweight tournament, expressed an interest in a rematch with Muhammed “King Mo” Lawal during a DREAM press conference Thursday.

An eight-man tournament recently scrapped for May 29’s DREAM.14 has been rescheduled as a four-man competition at DREAM.15. The news was first reported by Sherdog.com. DREAM.15, originally rumored for July 19, is now expected to take place July 10 at the Saitama Super Arena in Saitama, Japan.

“I don’t have a specific opponent that I want to fight,” Mousasi said. “I don’t know who is going to participate in the tournament but I would love to fight King Mo again. I hope on New Year’s Eve I will get my shot at him.”

“I think it wasn’t my takedown defense,” Mousasi said. “I was, in my life, somewhere else maybe. I fought his fight. I didn’t sprawl, I wasn’t sharp. maybe my condition should have been better. So, there are a lot of things that I could say that went wrong but basically it comes to: he fought his fight and he won. I didn’t fight my fight. It wasn’t that my wrestling wasn’t good enough or my sprawl wasn’t good enough, I think I just fought stupid.”

DREAM.14 will be the only cage event for the year and it is still a hot topic in Japan as of late. Mousasi also commented on if he thinks there is a significant difference between fighting in the cage and the ring.

“Yes there is,” he responded. “The cage is bigger so you have more space. For a wrestler, I think it is much better to fight in the ring than in the cage. The cage has more advantage for the stand up fighter. Maybe I should have trained the cage to stand up but those are new things that I have to learn and I think that I didn’t train that good enough. But there is definitely a big difference.”