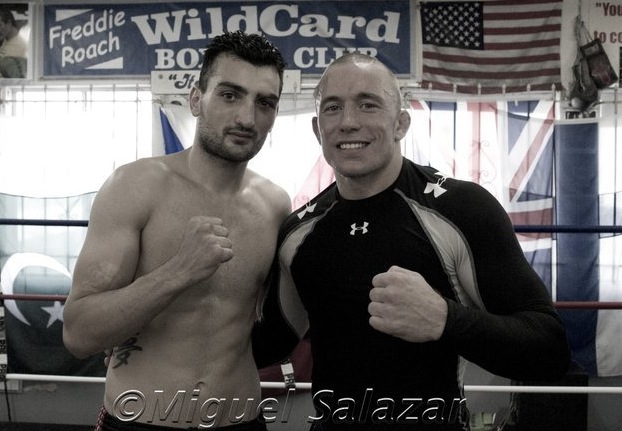 Training at the Wild Card gym, GSP is looking to close some of the holes in his game focusing on his boxing under the tutelage of Roach.

“It is time to focus on my boxing,” St. Pierre said. “When I get to the other side of my career I don’t want to be one of those fighters who have been hit too many times, so they keep getting knocked out. If you have the opportunity to work with someone like Freddy, you take advantage.”

Meanwhile, Roach looks at the training sessions as a personal challenge to teach one of the best wrestlers in mixed-martial-arts the dynamics of boxing. He’s got nothing but praise for the UFC champ, as the French Canadian fighter is quick to pick up on the training.

“It’s a challenge for me as much as it is for him,” Roach said. “The footwork and the stances are different than what I’m used to working with. I’ve never looked at MMA the way some [in boxing] have. A fighter is a fighter and a good one is going to pick up knowledge from wherever they can and apply it as they can.”

“Georges is such a tremendous athlete, and he’s such a fast learner,” Roach said. “We were working at different distances and different angles than he’s used to fighting in MMA, but he picked it all up so fast.”