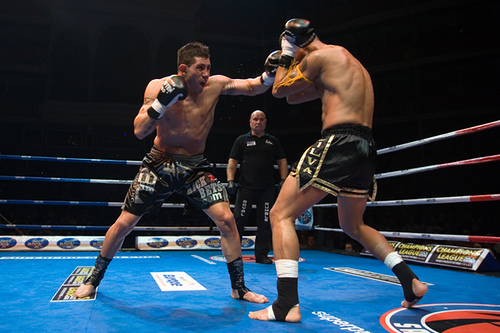 Serge TREFEU: Hello Gago how you go shape there. You have just fought for a championship of the World of Kickboxing against Portuguese Jose Reis.
You lost in points this fight can you return on this fight, of which think you of your opponent?
GAGO DRAGO: José is great fighter, the fight was hard, but I am not agree with decision, he get knock down in 4th round, many kicks to the head, but you know I think because it was his last fight and we were in Portugal, so they gave the victory to him, but its ok, you have to have some luck in this life, but its not for me…

S.T.: You have already gained champion’s belt of Europe WMTC (2004) but what is that you also gained world champion’s belt?
G.D.: I have world champion belt (Champions League), in 2008 my fight with Luis Reis in Portugal, but you know belts are not important for me, I want be strong, show hard and nice fights that people enjoy it, that make me happy.

S.T.: In K1 World Max GP on 2009 you meet Japanese Yuya Yamamoto in quarter of final, you lose the fight with a close decision, of which do you think of this fight?
G.D.: Against Yuya was hard fight, but again same story, he get the victory because it was close fight and we were in Japan, next time better.

S.T.: For go in the quarters of final of K1 World Max 2009 you had beaten one of the favourites of the tournament Japanese Sato, it was stronger that his Yamamoto and nevertheless you beat him, than think you of this fighter?
G.D.: Against Sato was harder fight, everybody thought I gonna lose the fight, so I show everybody that they are wrong!

S.T.: You lose your fight in points against him in a very close decision, do you think of having gained this fight in front of him?
G.D.: No I think he wins correctly the fight, I made more damage, but he made more points…

S.T .: Your best performance to K1 World Max was in 2006 or you beat Albert Kraus then you lose against winning of tournament Buakaw, can you come back on this tournament 2006 and which adversary was the most difficult to fight Kraus or Buakaw?
G.D .: Buakaw was difficult, but with Albert was more emotional fight for me…

S.T .: For K1 World Max 2007 you have also make two big fights, first faced with Mike Zambidis for the eliminatory then against the winner of Tournament, Andy Sauwer, in quarter of final, you can speak to us these two big “war ” which you have make against these adversaries?
G.D .: Against Mike was very close fight, he win with points, I hope I can fight with him again, against Andy was mine unlucky day, I was in front with points, but second round I get knock out…

S.T .: To win Tournament K1 World Max it is a priority objective for you?
G.D .: It’s very difficult to win K-1 Max, but I gonna try it very hard…

S.T .: The winner of Tournament K1 World Max 2009 is Italian Giorgio Petrosyan, he is originally from Armenia as you, like you to meet it in 2010 and of what think you of him?
G.D .: (Laugh) No I don’t want to meet him, he is too strong and very clever!

S.T.: You often fight also in the great event “It’s Showtime”, you beat many champion in this event as Imro Main, Murat Direkci, Stefan Veselic and many others, that think of you of this organization? Prefer you fight in K1 in Japan or in Amsterdam in “It’s Showtime”?
G.D.: 60% It’s Showtime Amsterdam and 40% K-1 Japan

S.T.: Chahid Oulad El Hadj you met him twice (1 draw, 1 lose) in “It’s Showtime” of whom think you of your fights in front of him?
G.D.: 1st time I win they give draw, 2nd time was draw they give to him. Shit happens…

S.T.: On May 29th in “It’s Showtime” of Amsterdam you are going to meet your compatriot Leroy Kaestner from Team Aerts, you know your opponent?
G.D.: He is a good and storm fighter, very good boxer, it’s gonna be heavy fight!

S.T.: Until today what was your hardest fight?
G.D.: Against Stefan Veselic 1st time, I was just begin a class and he was world champion, I was really scared to fight with him…

S.T.: What is your best memory of fight?
G.D.: My victory against Veselic I get 2nd round knock down and 3rd round I knock him out!

S.T.: You like making the “Show” before rising on the boxing ring, why, it is in your nature to make the show or it is to evacuate the tension before the fight?
G.D.: No it’s just happening, mine music do something with me…

S.T.: What technique you most like making in fight?
G.D.: Turn kick

S.T.: What are your strong points?
G.D.: Mine heart

S.T.: And your weak points which you would more like to work?
G.D.: Mine emotions

S.T.: You fight more in rule K1 than Full Muay Thai, you also like fighting in Muay Thai?
G.D.: No I don’t like Muay Thai, because I cannot fight with elbows

S.T.: You already went in Thailand for you train and to fight?
G.D.: Yes, I was in January in Thailand, train hard and fought 2 fights, both win very nice

S.T.: In your category who are for you the best world fighter?
G.D.: Buakaw Por Pramuk !

S.T.: There are opponents in particular that you would like to meet?
G.D.: Yes many, a lot…

S.T.: When you began the boxing what is what there are boxers who you one influenced for the continuation of your career?
G.D.: Jean-Claude Van Damme (Laugh)

S.T.: Can you speak to us about your gym with which you made a sparring and which is your trainer?
G.D.: My gym, in Alkmaar Holland, my trainers, Sieger (boxing), Charoon (kicking), Ozkan (condition)

S.T.: You were born in Armenia but towards which age you came in Holland?
G.D.: I was 15 when I come to Holland, I always gonna stay Armenian, but some part of me is also becoming Holland…

S.T.: Your family has of to leave Armenia because of the war in the region, what is that you come back to your native country since your arrival in Holland?
You have family over there?
G.D.: Yes but my family is with me…

S.T.: Why you changed your name Gagik Haroetjunjan in Gago Drago, to have fighter’s name?
G.D.: My trainer gives this name to me when I start fight, he says it’s easier for people to say your name.

S.T.: At which age you began the boxing?
G.D.: I start training when I was 15 years old, I want to become strong, because at school a get always troubles…

S.T.: You want to add anything?
G.D.: I would say big thanks to all my fans around the world, you are really great, I always gonna try to make you proud of me…

S.T.: Thank you for this interview and Good Luck for your fight of May 29th?
G.D.: Thank you also.

Certainly one of the fighters the most liked by the circuit K1 Max because his aggressiveness on the boxing ring is always impressive.

Since his arrival to K1 he lost every time against the winners of the Tournament in 2006 against Buakaw, in 2007 against Andy Souwer, in 2008 against Masato and in 2009 he defeated in quarterfinal against Japanese Yamamoto where many people saw him winning of this fight.

For K1 Max 2010 this warrior in the enormous heart will again be very present in front of redoubtable champion that his Petrosyan, Souwer, Kraus, Buakaw, Kyshenko, and certainly to create of big surprise!