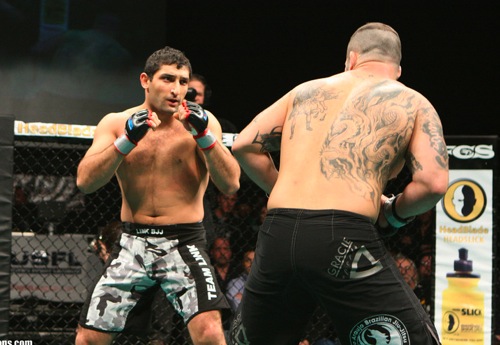 In the true class of the entire fight card may lie in the lightweight division as HyeFighter Karen Grigoryan (20-3-1) meets Alexander Sarnavsky (9-0), while Artem Damkovsky (7-3) faces Arsene Ubaidulaev (1-1).

In addition to his mixed martial arts background, Grigoryan also is accomplished in pankration, jiu-jitsu and combat sambo. A six-time M-1 veteran, Grigoryan defeated Magomed Magomedov via submission in the tournament’s opening round.

Meanwhile, while just 21 years old, Sarnavsky brings an impressive 9-0 record into the cage. The RusFighters Sport Club fighter has earned nine of the 10 wins via stoppage, including a February submission win via rear-naked choke over Maxim Kuptsov to book his spot in the semifinals.

In the other bracket, Damkovsky earned a unanimous-decision win over Shamil Abdulkerimov in February to advance, while Ubaidulaev also needed the judges to make it past Yuri Saakyan.

For additional information and an in-depth preview of the evening’s fight card, as well as to watch streaming video of all 20 quarterfinal matchups, visit M-1 Global’s official website.