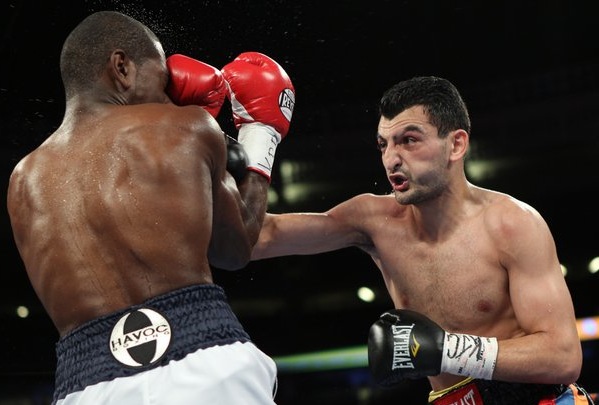 Greene (151 lbs) came out looking to pressure Martirosyan (153 lbs) in round one, landing hard right jabs and left hands under a tight guard. Martirosyan responded with right hands in close as the undefeated fighters warmed up. A Greene blow to Martirosyan’s beltline caused referee Steve Smoger to stop the action for a few seconds as the round came to an end.

The Nightmare went to Greene’s body in round two, landing several short left hooks to the body. Greene, intent on not yielding ground, responded with a big left hand. The good two-way action continued in round three, with Greene getting the best of Vanes in the early rounds.

Greene landed another big left hand in round four that caused Martirosyan’s left eye to swell. Martirosyan, in an attempt to go to the body, landed a low blow that again halts the action momentarily. The fighters traded combinations as the round came to a close.

The fighters took turns landing big shots in round six, with Martirosyan walking Greene down to the ropes and landing a right hand. Martirosyan credited Trainer of the Year Freddie Roach for providing the insight that can change a fight, including suggesting a right uppercut that Vanes did not think to throw but resulted in bloodying Greene’s mouth when it landed.

The difference in experience really began to show in rounds seven and eight, as Vanes Martirosyan began taking over the fight by pounding Greene with right hands and causing Mean Joe’s right eye to swell up. While Martirosyan had been tested steadily in the past few years against the likes of Andrey Tsurkan and former champion Kassim Ouma, Greene fought only once in 2009 and had never faced a top opponent.

The Nightmare sealed the victory in the final moments of the bout, landing a right hand behind Greene’s head in round ten that was counted as a knockdown. Judges Tom Schrek and Bill Costello scored the bout 96-93 each, while Julie Lederman saw it 98-91 for The Nightmare. After the bout, Martirosyan declared that he was ready for the best in the division, including the night’s big winner, Miguel Cotto.