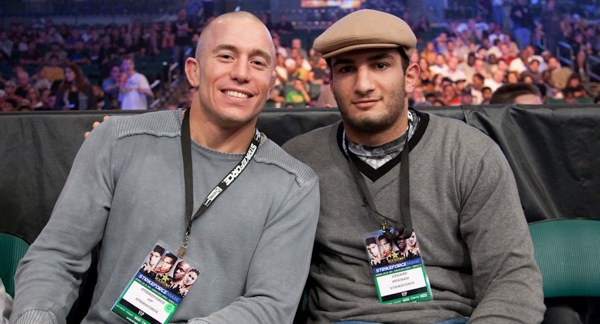 HyeFighter Gegard Mousasi racked up 15 consecutive victories before fighting with Muhammed Lawal in April. In that fight, Mousasi was taken down repeatedly and subjected to a “lay and prey” tactic that robbed him of his title.  He lost his Strikeforce belt and this will be his first fight after that loss.

At DREAM.15 on July 10, Mousasi will face Jake O’Brien in a four-man tournament for the DREAM light heavyweight title. O’Brien is a wrestler who is famous for a smothering top game that saps you of any offense.

The former Strikeforce and DREAM champion spoke to the press on Thursday about an opponent made to beat him, fighting his weaknesses and his goals for more belts.

PRESS: You fight in two days. How do you feel now?
Gegard Mousasi: I feel very good, I’m very confident. I think in this fight I’m going to fight very impressively. I want to give a good performance, but it’s going to be a very good fight.

What is your impression of Jake O’Brien?
He is a very good wrestler and his losses are only to the very best fighters in the world so I’m taking him very seriously and as a lot of Americans, he is cutting a lot of weight so on fight night he will be much heavier. He has good wrestling but being aggressive I’m going to take the advantage away from him.

You have been saying that you will fight aggressively. Do you think that the last Strikeforce fight [against Muhammed Lawal] affected your fight style? Do you think this will impact your fight?
Yes, definitely. I think I learned a lot from the last fight. When you lose, you learn a lot more. I think last time I was lacking a lot of aggressiveness and making it my fight. I was too patient. For this fight, I want to be the one who is going to make the fight. I’m going to bring the fight to him. That’s why I’m changing my fighting style, especially against wrestlers.

After the last fight, have you done anything new in your training?
Yes, I’ve been wrestling. Specifically wrestling. I’ve been training with Golden Glory fighters for my standup and Alistair [Overeem] for my MMA. As always I have been training with my friends who continue to help me. I have changed a lot of things and hopefully I will be able to show that in the fight.

Is there anyone specific that you brought in for your wrestling?
I did specific wrestling in a wrestling gym. I’ve been working on wrestling aside from MMA. That is something that I wasn’t doing in the past so I’m getting more confident in my wrestling. I learned that I didn’t know a lot about takedowns, it’s a really big gap and I’m catching up and learning a lot. I’m confident in my takedown defense this time a lot more than in my last fight.

When you win Saturday’s fight, the next fight would be the DREAM light heavyweight championship. You would have held two DREAM belts in different weight classes. How strongly would you like to get the belt in a different weight class?
It’s always been a goal of mine to get the belt in different weight classes. One day heavyweight, but it’s too soon for that. To win two belts in DREAM it’s going to be like what Dan Henderson did in PRIDE. I think it would be a very big accomplishment to win two belts and it’s definitely a goal of mine. I want to make a statement with this fight, I want to convince people that I really want the belt.