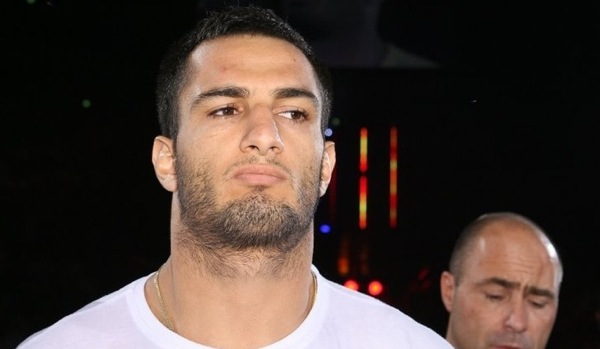 After a 31-second dispatching of UFC vet Jake O’Brien at this past weekend’s DREAM.15 event, HyeFighter Mousasi is already itching to get back in action.

“I hope to fight (in Strikeforce) in October,” Mousasi recently told MMAjunkie.com Radio (www.mmajunkie.com/radio). “I haven’t talked to (Strikeforce CEO) Scott (Coker). I met him in Japan, and I asked him to maybe fight in DREAM and a month later in Strikeforce. If that would be possible, I would love to fight.

“Of course, I’m also going to fight on New Year’s Eve in Japan, but if it’s possible to fight in October, I would love to.”

With the win over O’Brien, Mousasi booked himself a September date with Tatsuya Mizuno, who defeated Melvin Manhoef, at DREAM.16 with the company’s vacant light heavyweight belt on the line. While Mizuno’s 8-5 record pales in comparison to Mousasi’s, “The Dreamcatcher” said he’s not overlooking anyone.

“I feel like he’s a guy that wants to get better,” Mousasi said. “He trained six months in the U.S. He’s a fighter that keeps trying to improve himself. That’s a fighter you always have to be careful. Next time he’ll be much better, probably.

“I think a win over Melvin Manhoef is always good because Manhoef is one of those fighters that can always win from any fighter but also lose to top competitors. I think he did well. He gave 100 percent in the fight, and next fight I’m going to give 100 percent. I really want to fight an aggressive fight, so I think it’s going to be an exciting fight.”

Mousasi said he hopes to fight aggressively in the matchup. It’s a mindset he’ll take into all of his upcoming fights after learning a valuable lesson in an April loss to Muhammed “King Mo” Lawal.

“Basically, I was thinking to let [Lawal] take me down,” Mousasi said. “The first two rounds, I felt OK, I would say, fighting from my back. Rounds three, four or five, I would come back and finish him. Unfortunately, somehow I got caught in his game.

“I wasn’t thinking about the takedown defense. There’s a million things I can say that I did wrong in the fight, but it happened. Now I have to go and see what I did wrong, try and work on my mistakes and come back better.”

Mousasi made no such mistakes against O’Brien, also a capable wrestler. Mousasi fended off the shot and latched onto a guillotine choke for the quick finish.

The Dutch-Armenian striker believes the win shows some of his improvement, but he’s focused on more.

“[O’Brien] came overweight,” Mousasi said. “He was much heavier. I think fight day he was maybe 230 pounds, but I didn’t think he was the same caliber wrestler as ‘King Mo.’ I think with the ‘King Mo’ fight, people say that maybe it was my wrestling, but I feel like I didn’t even sprawl. I think it was a lot more than just my takedown defense.

“I didn’t think it was my wrestling, but I wasn’t thinking about my takedown defense in the fight. I think that was my mistake in the ‘King Mo’ fight. Of course I’m working more on wrestling specifically in a wrestling gym, and I’m going to continue to do that in the future.”

O’Brien was fined 10 percent of his purse for missing weight, which was awarded to Mousasi.

As for who Mousasi meets in Strikeforce, he says he’s not sure. However, he’s willing to take on just about anyone.

“I haven’t talked about an opponent,” Mousasi said. “It’s always up to Scott to see who they think the fans would like to see. Dan Henderson would be a good fight. (Renato) ‘Babalu’ (Sobral) is also good.

“I would love to fight at heavyweight also. If there is a heavyweight fight, and it makes sense, I would fight that fight.”

So with potential fights in September, October and December on the horizon, Mousasi is planning a busy finish to 2010. But first, a quick trip to see family in Iran and a chance to spend O’Brien’s fine.

“I’m going to spend that money on holiday,” Mousasi said. “When I go out to dinner, I’m going to thank him.”