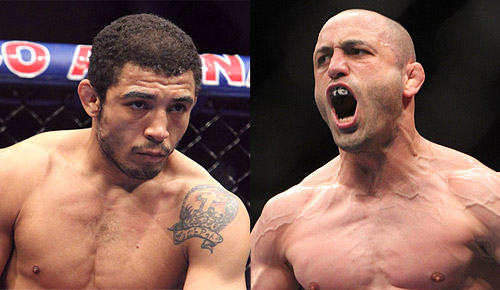 Source: MMAWeekly
Former UFC lightweight and current number one WEC featherweight contender Manvil Gamburyan recently spoke with MMAWeekly.com about earning a title shot against featherweight destroyer Jose Aldo and on relishing the underdog role he has been cast in against Aldo.

Gamburyan joined the UFC’s lightweight division after a stint on the fifth season of The Ultimate Fighter in which he lost in the finals to Nate Diaz after his shoulder dislocated, forcing him to tap. Gamburyan would go 2-2 in the UFC after that fight and would drop to the WEC’s featherweight class after posting two losses in a row in the UFC. Since joining the WEC, Gamburyan has gone 3-0 and recently earned a shot at champion Jose Aldo’s belt by knocking out former champion Mike Brown in the first round of their WEC 48 match. Gamburyan said that the manner in which he defeated Brown likely secured him the title shot.

“I know it made the decision easy for the WEC as far as, ‘Is Manny getting the next title shot,'” said Gamburyan. “I made it easy by knocking out Mike Brown. I knew I’d be fighting Aldo or Faber.”

Aldo has been on a tear in the featherweight division, having gone undefeated in seven WEC fights with brutal victories over former champions Mike Brown and Urijah Faber on that list. Aldo is undefeated in his last ten fights overall and only has one loss (dating back to 2005) in eighteen professional fights. Known for his flashy and brutally efficient style, Aldo will be a heavy betting favorite against Gamburyan and the Armenian fighter is perfectly happy to accept the role as underdog.

“To be honest with you, it’s more fun,” said Gamburyan. “When you’re the underdog, you don’t have anything to lose. Like right now, I’ve got nothing to lose. He has what I want, he has everything I need, and I’m going to go out there and take it from him.”

The fighter formerly known as “The Anvil” told MMAWeekly that he has brought in experts in all areas of MMA to prepare for Aldo but has been focusing especially on sharpening his Muay Thai as Aldo is known primarily as a striker (though he owns a black belt in Brazilian jiu-jitsu).

“More Muay Thai guys, more wrestling guys, more jiu-jitsu guys,” Gamburyan said of who he has been bringing in to his camp to help him prepare for Aldo. “I’ve been sparring with Muay Thai guys. They’ve been throwing knees at me and kicks at me, at like 25 miles per hours. I’m bruised every day, I’m cut up every single day, but it is what it is. This is what it’s going to take for the belt. I’m one inch away from my goal so I’m not going to waste my time.”

Gamburyan explained to MMAWeekly that he has nothing but respect for Aldo, that he understands why he has received the accolades and hype that he has but that he is the man to take his belt.

“He’s definitely beatable,” said Gamburyan. “Like I say, he’s the Brazilian phenom, he’s a great fighter that guy. It’s going to be an honor fighting him. I can’t take anything away from him. He’s got very good stand up, good kicks, knees, punches. But I see some weaknesses that I’m working on right now. Hopefully it’s going to be my night Sept. 30. Some people say shock the world, like I was the underdog against Brown. I don’t know if I shocked the world, but I’m going to do the same thing against Jose Aldo.”

Gamburyan and Aldo are set to meet this September 30th at the aptly named WEC 51: Aldo vs. Gamburyan which is scheduled to take place at the 1stBank Center in Broomfield, Colorado.