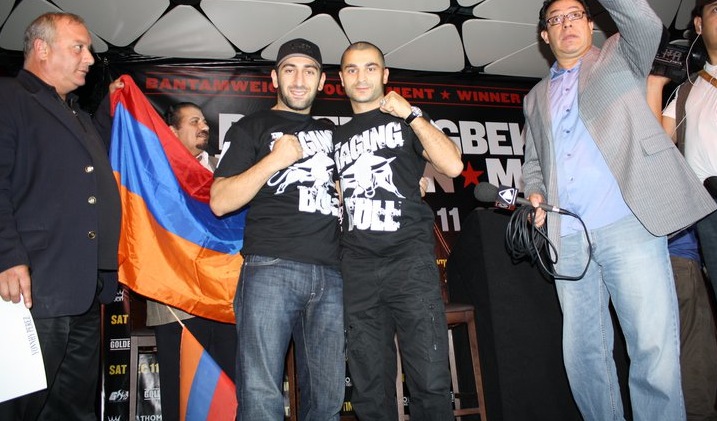 SHOWTIME® Sports hosted a press conference Thursday at The Conga Room , L.A. Live, to formally introduce and discuss “BANTAMWEIGHT TOURNAMENT: WINNER TAKES ALL” that begins Saturday, Dec. 11, live on SHOWTIME at 9 p.m. ET/PT (delayed on the West Coast) from Irapuato, Mexico. In attendance was Ken Hershman, SHOWTIME Sports Executive Vice President and General Manager, the four world class boxers who will participate in the two-round, single-elimination tournament to determine the best fighter at 118 pounds – International Boxing Federation (IBF) champion Yonnhy Perez (20-0-1, 14 KOs), former world champions Joseph Agbeko (27-2, 22 KOs) and Vic Darchinyan (35-2-1, 27 KOs) and world-ranked rising star Abner Mares (29-0-1) – and their promoters.
The semifinal matchups: Perez defends his title against Agbeko and Darchinyan and Mares vie for the World Boxing Council (WBC) Silver Belt The bouts are scheduled for 12 rounds. The winners of each semifinal will clash in the final in 2011 with the losing fighters competing in a consolation fight.

Each of the participants in the bantamweight tournament has previously fought at least one of the other fighters in competitive bouts, all on SHOWTIME.

What the fighters, Hershman and the promoters said Thursday:

“I want to thank the press for coming out and the fighters and promoters for participating in this amazing series of fights. Our promise to our subscribers has always been very simple and that’s to put on the best fights as possible and let the fans enjoy it. I think we have four of the top 118-pounders in the world and I don’t think there’s a bad matchup in the bunch.

When we looked at the various configurations, we couldn’t figure out where we wanted to go and that to me is exactly what you want. You don’t go into the fight knowing who’s going to win, who’s not going to win, everyone gets two shots and I think we’ll be able to claim who’s the undisputed champion in this weight category.

“I believe the sport of boxing is a tremendous sport by itself, but I think when you overlay tournament style rules to this sport it becomes that much more thrilling. Obviously, for our subscribers, keeping it new, keeping it fresh is what we’re after. I want to thank the promoters. This was really a very cooperative effort.”

“This really is an amazing lineup. It’s natural for Mexico to host the opening round of this tournament. As we all know, Mexico has a rich and deep history with bantamweights.

“These four fighters will deliver what I know will be the best four fights.’’

“The four-man tournament is great. Tournament boxing is great. It helps not only fighters but boxing because in this tournament you have four of the best fighters facing each other. There’s no ducking any fighters here. You’re fighting the best no matter what. You don’t pick fighters in a tournament and this is what people want and I want that. I am here for the fans.

“I want to take the time to thank SHOWTIME for putting this show together and not forgetting about the little guys because there are a lot of people that don’t even look at the little guys. It’s a great opportunity for all four of us. It’s tremendous for the weight class and I love it.

“It’s a privilege to fight Vic Darchinyan. He’s a well-known fighter, a big name. He’s beaten a lot of good fighters. All around I think he’s a good fighter but I don’t think of myself as a bad fighter. I think I’ve got the perfect style for him. I think it’s going to be a tough fight for both of us.

“I’ve got to take it fight by fight. But this fight is really big. I’ve got to take full advantage of my opportunity.
It will be my first time fighting in Mexico so that is exciting.’’

(On fighting Yonnhy Perez to a draw on SHOWTIME)

“I was ready. I said I was ready for that fight and I proved it going the 12 rounds. I still haven’t got over it because I have people telling me, ‘you won the fight.’ (But) it is what it is.’’

“I think we’re going to have the most fabulous tournament ever. We’ve got four of the best fighters in the bantamweight division and they’re from all over the world: Ghana, Mexico, Armenia and Colombia. We’ve got a mix like never before — future champions, former champions and current champions. With this mix, you’ll never see fights like this again. But in the end we think the IBF Champion of the World, Yonnhy Perez, will be standing there right in the middle of the ring as the world champion. We’re looking for everything that could possibly happen to happen in this tournament. This is the greatest collection of bantamweights ever.’’

“I’m very happy that SHOWTIME is putting this tournament on. In the end it’s going to show who the best bantamweight in the world is. For SHOWTIME to get all these promoters together is great because you don’t have to get fights. It’s set. Whoever wins goes on; whoever loses, there is still a fight. My goal is to win it all. I’m very happy about the tournament because basically everyone included has a title.

“I can’t express how thankful I am to SHOWTIME for putting on this tournament and even putting me on Shobox when I first came up from Colombia. I’m very thankful. After everything is done I hope I continue to have their support and I’ll always be ready to fight and will always give a great fight for SHOWTIME.

“I’m concentrating on my fight. I don’t consider myself the favorite. I know I’m the world champion but I go into every fight thinking I’m the underdog. I’m going to prepare for this fight and come out victorious.’’

“This is a great tournament. There are four great fighters. I have a lot of respect for all of them. Agbeko fought a great fight and Darchinyan had concrete between his ears, didn’t listen to his corner and I believe cost himself the fight, but Yonnhy finished the unfinished work of Vic by finishing Agbeko off.

“Abner Mares, who I have a tremendous amount of respect for, is the youngest fighter and was in an absolute war with Yonnhy. I thought Yonnhy won by one round but I thought Mares showed a huge amount of heart and courage, stayed in that fight and took it to a draw. Darchinyan is the oldest fighter on the stage, the one with the most experience. Everybody at SHOWTIME knows Darchinyan and they know how he thinks and they know when he fight, he comes to fight. He’s never in a dull fight.

“I want to tell you how you confident I am in Vic Darchinyan. This fight is in Mexico, but I told Vic ‘don’t worry, you are the best in the tournament.’ He said, “You really believe that?’ I said, ‘I believe it so much I called up Jose Sulaiman and we’re going to have a Mexican referee, we’re going to have three Mexican judges, a Mexican timekeeper and I know you’ll win.”

I want to thank Gary Shaw , Ken Hershman and everyone at SHOWTIME for putting on this show. Now, the whole world can see at bantamweight who’s the best. I am very happy for this tournament. I’m physically prepared all the time.

“I’m happy I’m fighting in Mexico. My style is a Mexican style, guys are coming to fight, coming for a show, so that’s what I’m going to do. Mexicans love my style. I am not against them, I am not against anyone. I’m just against my opponent. It just happens Mexicans have been my opponents, which is good. Mexicans are good fighters.

“The two other guys (Francisco Montiel, Nonito Donaire) that didn’t want to be in the tournament know they cannot be at the same level. Some of them think they are good, but if you’re good, get in the tournament. If you’re one of the best at bantamweight, come and fight. Mares is a good fighter.

“I’m going to be prepared for anything. No fear. I moved up to challenge other champions. The super tournament connects all the dots. I don’t want to defend my titles and fight No. 10, No. 15. If I fight, I collect all belts. The point is not who you can beat, it’s what champions you can beat. I want to prove myself and I want to prove to everyone I’m the best. Why worry?

“I happened to be at ARCO Arena in Sacramento in 2007 when pretty much an unknown guy came in to face a tough as nails Nicaraguan name Luis Perez. He had been the ideal bantamweight champion since 2003 Joseph knocked him out and sent him to the hospital. That’s how he catapulted himself to this stage. Later, in his career-defining fight, he met Darchinyan.

“It’s always going to be a good promotion with Vic, a lot of back and forth talking. The Florida commission used SHOWTIME’s clock and there was an extra minute in a round and in that round Vic knocked Joseph down. It was a wonderful fight and Joseph was fortunate enough to come out with a victory. Then, there was the “Halloween Thrilla” at Treasure Island on SHOWTIME where Yonnhy met Joseph. Yonnhy had a great game plan and I give him everything. In the 10th round there was a terrible head butt and Joseph got knocked down. The referee didn’t see it, and called it a knock down. Joseph feels like he has some unfinished business.’’

“I’m very motivated to get back the belt because Ghana has no champion right now. They all have supported me and want me to win the title.’’