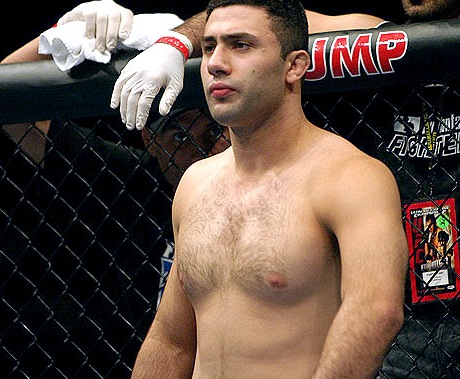 UFC 123 takes place Nov. 20 at The Palace of Auburn Hills in suburban Detroit. A light-heavyweight bout between former champs Quinton “Rampage” Jackson and Lyoto Machida headlines the pay-per-view portion of the show.

It’s not known if Parisyan vs. Hallman and Harris vs. Falcao will get main-card or preliminary-card placement.

MMAjunkie.com (www.mmajunkie.com) recently passed along news of both bouts.

UFC president Dana White recently said Parisyan never again would fight in the octagon when the Armenian-American fighter withdrew from a scheduled matchup with submission specialist Dustin Hazelett this past November. It was the second last-minute withdrawal for Parisyan, who also bowed out of a fight against Yoshiyuki Yoshida at UFC 88 with a back injury.

But the Los Angeles native did not give up on a return. He campaigned publicly for another shot in the UFC following a second-round victory over Ben Mortimer at a recent Impact FC event. He’s now 4-1 (with one no-contest) in his past six fights.

His upcoming opponent, Hallman, returns to action after a key victory over Ben Saunders at UFC 117. A significant underdog, the Northwest veteran used his significant advantage on the mat to cruise ahead on the judges’ scorecards for a unanimous-decision victory. The win, which followed a heart-breaking late-fight knockout loss to John Howard at the The Ultimate Fighter 10 Finale, likely saved his UFC career.

Meanwhile, Falcao, a Chute Boxe product, brings an impressive record to the octagon that includes a stunning total of 24 finishes among his 25 career wins. Among those stoppages, 21 have come via knockout. “Big Rig,” who has fought just once in 2010, has finished his past seven opponents in the first round, and his lone career decision came in 2004.

Harris brings his own 10-fight win streak to the cage. A cast member on “The Ultimate Fighter 7,” Harris was released by the promotion following his appearance but returned to the UFC in January and has since earned three-straight knockout victories over the likes of John Salter, Mario Miranda and Dave Branch.