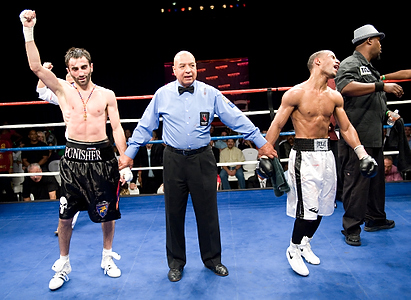 A smoker at the off-strip Silverton Casino last night saw a return to local boxing in Las Vegas with a half-dozen four-rounders and a sixer. The card, promoted by Roy Englebrecht and billed as “Battle in the Backyard” featured a handful of young prospects who kept their records clean against opponents ranging from lifeless to live.

Lightweight HyeFighter Artur “The Punisher” Bernetsyan, of Glendale, Calif., had to work the hardest for his win. In his six-round main event, the Armenian southpaw had to dig deep to pull out a win from Rynell Griffin, of New Orleans, who proved a leap up in class from the tomato cans he kicked around in his first four bouts.

The first two rounds were all Bernetsyan. Though Griffin was certainly game, his wide shots did little to dissuade Bernetsyan from bashing him with occasional right hooks.

The most damage came from two accidental head bangings – at least for Bernetsyan, who came out in round three with a protruding knob on his forehead. After a third clash of noggins, the doc was summoned ringside for a look-see. The fight continued but, from this point on, Griffin was suddenly live. Griffin poured on the aggression in what turned out to be a close round.

The fourth frame, also very competitive and marked with yet a fourth clash-o-heads, became a war of right hands – Bernetsyan’s hook and Griffin’s straight shot. The two stood in front of one another through the fifth, banging away, Bernetsyan mixing it up with body shots, and Griffin headhunting. Tiring, the Armenian sought to tie up through the sixth though Griffin was as game as ever.

Bernetsyan remains undefeated, climbing to 5-0, 2 KOs, while Griffin drops his second bout in a row, falling to 6-4-1, 2 KOs.