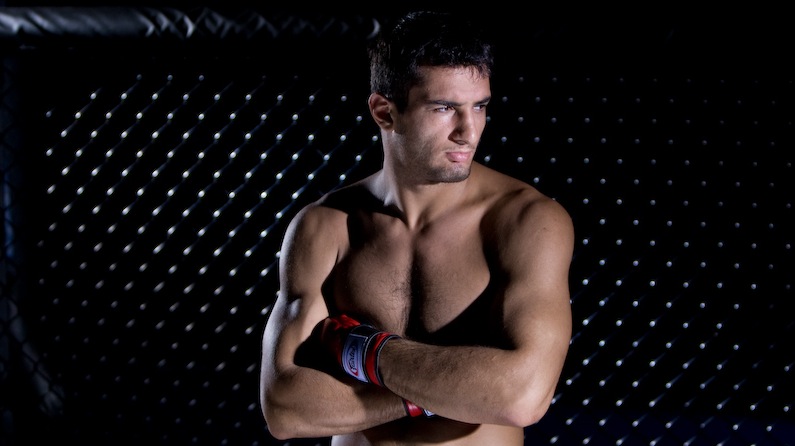 DREAM “Dynamite!! 2010” takes place Dec. 31 at Saitama Super Arena in Saitama, Japan. No fights officially have been announced, but Mousasi is hopeful for an MMA-rules bout with Le Banner (3-1-1 MMA, 0-0 DREAM).

“I don’t know if I’m fighting him yet,” Mousasi said of Le Banner. “They haven’t confirmed. They asked me, and I said yes, so now if he said yes, the fight is on.”

Mousasi specifically wants to fight the heavyweight, who’s a French knockout artist with a 76-19-1 pro-kickboxing record, as a wake-up call to overseas fans. But he admits such a bout may have little interest in the U.S.

“If I fight Jerome LeBanner in the U.S., [he] wouldn’t be considered a good MMA fighter,” Mousasi said. “But in Europe because he’s a popular K-1 fighter, it’s fighting a big fight. It doesn’t matter if it’s MMA or K-1, so it’s good for me (and) my name in Europe if I could beat him. And he’s big and strong, so it’s a challenge for me to get him down. I know that once I can get him down, I can win. But that’s the challenge.”

Le Banner weighs approximately 260 pounds, and just two years ago, Mousasi won DREAM’s 185-pound title. But he’s bulked up since then and won light-heavyweight titles with both DREAM and Strikeforce. And currently, he said he weighs about 222 pounds.

“It’s too short a time to put a lot of weight on, so maybe two or three kilos more, but that’s it,” said Mousasi, who heard Satoshi Ishii also could be a potential opponent for the year-end DREAM event. “But I don’t consider weight to be that big of a deal. As long as my technique is better, it will make up for his strength.”

So when is his return to the States?

Strikeforce hasn’t officially announced any shows past the Dec. 4 “Henderson vs. Babalu” event in St. Louis. So has Mousasi begun preparations for the bout?

“No, you never know how things will go,” he said. “Maybe I get another [opponent]. But that’s the fight that they want. He’s a tough opponent. He’s already beat the champion (Rafael Cavalcante). But I don’t know for sure that I’m fighting him, but most likely it’s going to be him.”

The game plan? Beat Kyle, get another Strikeforce title shot, and the reclaim his belt. Then, Mousasi said, he would consider a move to heavyweight – a plan he’s discussed frequently for the past couple years.

“I’m going to train a little like (UFC welterweight champ) Georges St-Pierre (with) wrestling, jiu-jitsu, judo and kickboxing and then put them all together in my own gym where I train,” he said. “I’m train to improve myself in all aspects, not just one area.

“I’m a standup fighter, but when I see all my fights, I finish them on the ground. My best strength is ground and pound, so I want to always be on top. If I want to have the advantage with my ground and pound and control, I need to be a good wrestler to take them down and be in top position. Even if I don’t fight a wrestler, I’m going to improve my wrestling because I want to be the guy that takes them down.”