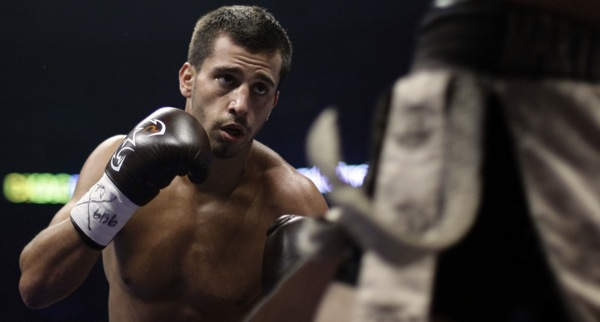 After annihilating 23 of 24 opponents, all within the first five rounds, knockout sensation HyeFighter David Lemieux once again headlines tonight at the Bell Centre in Montreal. The opponents have been ratcheting up for the Montreal middleweight who destroyed both Hector Camacho and Elvin Ayala in the opening round in his last two outings.

Seven year pro Purnell Gates of Michigan gets the call and is faced with the unenviable task of trying to slow the runaway freight train Lemieux who is due to face off against Marco Antonio Rubio for a WBC (that already boats two champions at middleweight already) silver belt tentatively set for April. Purnell boasts an impressive 18-1 record but the majority of his wins have come against sub-500 opponents.

“He’s never been stopped, so we’ll see what he’s got,” Lemieux told Fightnews as he stepped off the scales yesterday. “I’ve never seen him before, so we’ll just have to go in there and find out.”

Lemieux’s trainer Ruus Anber didn’t know too much of Gates either, but figures the fighter with the nickname of “Knock you out” and has 13 stoppages in his 18 win is bringing power to the ring. “I think we’ll have to be careful of this guy’s power,” said Anber. “We know he’s been a sparring partner for Andre Direll, Andre Ward and Sakio Bika, so we know he’s worked with quality.”

Despite winning 20 fights inside six minutes, Anber sees a patience developing in Lemieux as his career progresses. “His patience is definitely improving, he doesn’t end things on Hail Mary’s but has good clean punching and is taking guys out that way.”

With Rubio waiting in the wings, there was no doubt of Lemieux taking the fight against what is largely an unknown quantity. “The alternative was that or not fighting at all,” said Anber, “Besides, if we can’t handle him, we really don’t deserve what is waiting in the wings.”

“I look at this fight as preparation and keeping me in shape,” said Lemieux. “I’ve never seen him, so I have to be careful, but we’ll see tomorrow.”

You can read more about David Lemiuex here…..

This guy is the REAL DEAL!!!!! Check out the knockout below….at the 7 minute mark: