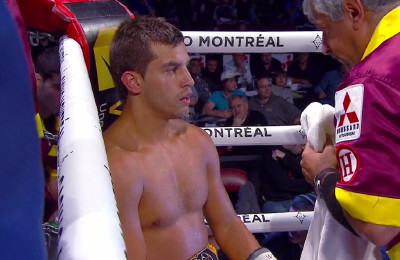 HyeFighter middleweight sensation David Lemieux did it again last night in Montreal. Known already as a quick finisher, the unbeaten 21-year-old wasted no time at all in getting rid of 37-year-old journeyman Purnell Gates, forcing the Michigan man’s corner to thrown in the towel in the 2nd-round.

Lemieux had scored two knockdowns and, to make Gates’ chances of surviving even more slim, the previously unstopped fighter known as “Knock You Out” injured his right hand in the opening round. Seeing that pulling their man out was their only option, Gates’ corner ended the fight at the 2-minutes and 50-second mark of round number two. Lemieux is now 25-0(24). Gates, who tried his best, is now 18-2(13).

It’s a tough job, no doubt, for Lemieux’s team to match him at present. As good as he is, fans want to see the 160-pound destroyer in with good fighters; recognisable names. But at just 21, the Canadian cannot be rushed. Last time out, back on October 29th, Lemieux entered the ring to face the experienced Hector Camacho Junior, and a testing fight was expected for him. Instead, he made even quicker work of Camacho than he did of Gates!

The word is that next up for Lemieux could be Mexico’s former world title challenger Marco Antonio Rubio, in an eliminator. That fight, if it happens, should be a very good test for the lethal-hitter who has fans in Canada going berserk.

30-year-old Rubio, 48-5-1(31) has won five in a row since being TKO’d by then middleweight champ Kelly Pavlik in Feb. 2009. That 9th-round retirement loss marks the only time Rubio has been stopped at middleweight (though he was blown away inside a minute by Kofi Jantuah down at 154-pounds, back in 2004), and on paper he should be able to give Lemieux a fight.

Having been in with other good names such as Jose Luis Zertuche (twice) and Rigoberto Alvarez, maybe, just maybe, Rubio has the necessary stuff to be able to make it out of the early rounds against the Canadian!

To date, Lemiuex has been taken the distance one time (ten-rounds, by Jason Naugler, the loser failing to win a round), and he has scored an amazing 21 KO’s inside two rounds. Can Rubio force Lemiuex to earn his paycheque?

Judging by the swift manner in which he got the job done last night, Lemieux will be ready to go again on the talked-of date in February – if not sooner.