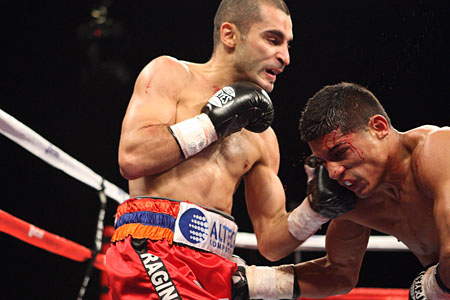 Two-division world champion Vic Darchinyan has requested that Fightnews send Abner Mares his congratulations on his outstanding victory in one of the best fights for 2010, and also for being such a great kid.

“It was very disappointing for me to lose the fight against a good young fighter like Abner Mares,” Darchinyan said. “Congratulations to Abner, he is a tough kid who fought a great fight. Even after winning seven world titles I have learnt something valuable and that is not to leave the decision in the hands of judges. The only negative thing I have to say from this fight is that we should be talking what a great war me and Abner had, and not talking about the way the fight was over-refereed. I have never had a point taken off me in all my fights and I am sure Abner hasn’t ever had a point taken from him, Let us fight! We go into the ring and we fight for our lives, we both should be allowed to fight our natural fights. Both of us were always being told to do this and that, I think the referee started to confuse himself and not only us.”

“We had a great fight and I hope in the near future we can fight again. It was good to fight Abner. I think Abner is a lot like me and that is we will risk everything for our fans. Our fans wouldn’t want to see us fighting bums like other fighters do. We didn’t have to fight each other. The same goes for King Kong and Yohnny Perez, we are here for our fans and without them we would ne nowhere.”

“I can’t wait to fight Perez. I know it’s going to be a war and I know I won’t make the same mistake again and leave it in the hands of the judges again. I will make sure to go out and finish the job I started.”