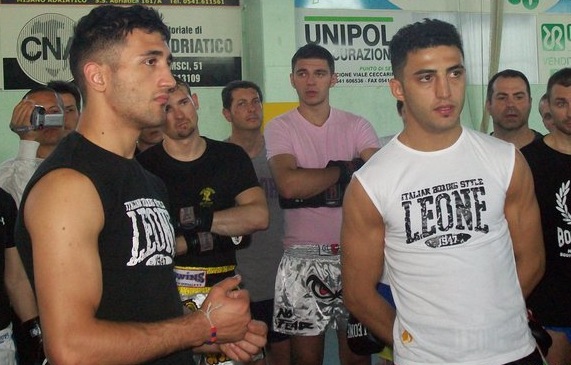 HyeFighter Giorgio Petrosyan and Sudsakorn Sor. Klinmee fought an enjoyable three round battle that I would highly recommend to fans. While initial stages of the bout were marked by hard leg kicks from both fighters, Petrosyan got the better of exchanges in the early part of the first round. Sudsakorn certainly held his own, landing solid shots late in the first and at moments during the second, but I would have to say that a series of left hands from Petrosyan were again the best offense seen in the second. Petrosyan continued to be just one step ahead of his Thai opponent in the third round and secured a decision victory.

Following the bout, Petrosyan restated that he would be fighting Cosmo Alexandre at Oktagon 2011 in Milan.

HyeFighter Armen Petrosyan also showed himself to be a cut above his competition while taking a unanimous decision against Romanian Miodrag Olar. While Olar threw a number of hard leg kicks throughout the fight, he was sent to the canvas by a series of hard right hands near the end of the first round. The second round was marked by Petrosyan’s defensive skill, as he avoided a number of wide shots and head kicks while continuing to work the body with kicks and knees of his own. The Romanian did connect with a wonderful shot at the end of the second round and a couple more early in the third, but it was truly Petrosyan’s bout.

After the bout, the younger Petrosyan confirmed that he would indeed be fighting Yoshihiro Sato.