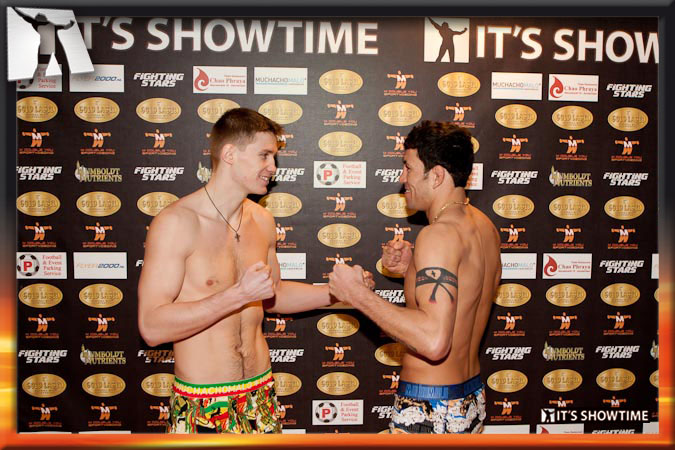 HyeFighter Gago Drago loses to Artur Kyshenko on points in Amsterdam.
Below is the play by play:

Round 1: After the Drago Dance, we are ready to go. Southpaw Kyshenko lands a left to the body early. Cross-hook combination from him amidst some shots that they are trading. Kyshenko more busy, left up top then to the body. He’s thrown a couple knees already too. Looks like he split the guard of Drago with a left cross. Kyshenko misses with a head kick. Drago throws a good left hook around 1:38, Kyshenko coming with uppercuts about ten seconds later, moving well and goes back to the body. Looks as though Kyshenko has caught Drago well. Camera angle isn’t good, but looks as though Kyshenko has split Drago’s guard with a left cross once more. Kyshenko in the corner around :30 but Drago not capitalizing. Leg kicks from Drago. 10-9 Kyshenko here.

Round 2: Kyshenko to the body early once again. Drago doing nice work with the leg kicks, but Kyshenko still controlling. Good speed and Kyshenko is landing some lefts. A knee seems to have wobbled Drago, he responds by throwing heavy hands and some good leg kicks. Threw left hands from Kyshenko, one to the body and two up top around 1:40. Drago trading leg kicks for Kyshenko’s left hand. Overhand right from Drago around :35, Kyshenko back to throwing knees. Right hook looks to have landed for Kyshenko and he’s landing with Drago against the ropes at round’s end. 10-9 Kyshenko.

Round 3: Kyshenko landing better early in the round, his speed is a problem for Drago. Leg kick turns into an accidental low blow from Drago. Kyshenko with a head kick that doesn’t land cleanly, follows with a left and right. Gets Drago in the corner, does work. Throws another head kick once Drago gets out the corner. They exchange at 1:30 with Kyshenko landing the most clean shot, an overhand left. Kyshenko works the jab now, comes in with a knee. Opening up with combinations now, Kyshenko not landing everything with still scoring. Spinning kick from Drago misses. Drago with another leg kick while Kyshenko lands a few more shots. 10-9 Kyshenko again. Kyshenko is announced as the winner.