HyeFighter Arthur Abraham Fighting Ward in Los Angeles on May 14 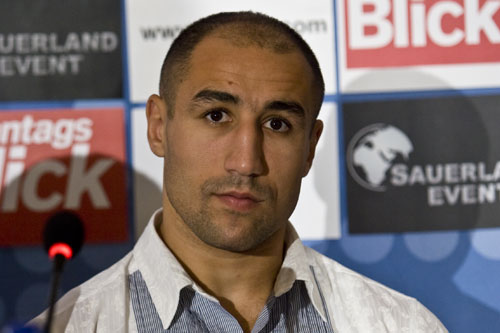 The Super Six World Boxing Classic Semifinals are set to begin. Andre Ward, Arthur Abraham, Carl Froch and Glen Johnson are all one victory from the tournament final en route to 168-pound supremacy. On Saturday, May 14, Ward will defend his WBA super middleweight world title against European superstar HyeFighter Abraham to kick off the Semifinals of the groundbreaking tournament LIVE on SHOWTIME® at 10 p.m. ET/PT (delayed on the West Coast) from The Home Depot Center in Carson, Calif.

“The stage is set for the dramatic conclusion of the Super Six World Boxing Classic,” said Ken Hershman, Executive Vice President and General Manager of SHOWTIME Sports®. “We have seen some tremendous fights, scintillating action and surprising twists and turns. These four semifinalists have all survived the tournament’s rigorous road to this point but they are not done yet. They need two more outstanding performances if they want to truly be considered No. 1. I can’t wait for May 14.”

For Ward (23-0, 13 KOs), with his November victory over Sakio Bika and convincing wins over Mikkel Kessler and Allan Green in the Group Stage portion of the tournament, he enters the single elimination bout against Abraham as the tournament favorite. Ward, of Oakland, Calif., can advance to the tournament Final to face the winner of the upcoming Froch vs. Johnson Semifinal bout with a win over the former middleweight champ.

“I’m ready to get back in the ring and kick off the Semifinals against Arthur Abraham on May 14,” Ward said. “I’m just one win away from reaching the Finals and achieving what I set out to achieve when I entered this tournament: Super Six champion and the world’s best 168-pound boxer.”

Ward continued: “I’m also happy to return to The Home Depot Center. I fought there once before and I think it’s a great outdoor venue. Arthur should have a lot of fans there with the large Armenian contingency in Los Angeles, and I will have a lot of fans as well.”

”California fans are going to be treated with what I believe will not only be a very exciting night of fights at the championship level, but witnessing the next superstar in Andre Ward. He reminds me of Sugar Ray Leonard, tough as nails, classy, charismatic with matinee idol looks,” stated Dan Goossen of Goossen Tutor Promotions.

Abraham (32-2, 26 KOs), of Berlin, Germany by way of Armenia, entered the tournament as a heavy favorite alongside Kessler. But after emerging from Group Stage 1 as the points leader with a knockout win over Jermain Taylor, Abraham is now trying to bounce back from consecutive tournament losses to Andre Dirrell and Froch in Group Stages 2 and 3, respectively.

With a win over Ward on May 14, Abraham, who entered the tournament with an unblemished record, can once again become a world champion and the tournament favorite heading into the Finals.

“I have a lot of respect for Andre Ward,” Abraham said. “He has proven his class and he has defeated a lot of strong opponents. But once we meet in the ring, the past does not matter anymore. I had a very bad day against Carl Froch but I have put that behind me and learned from my mistakes. I am ready to bounce back. That is what being a true champion is all about – to come back from a loss and win the title again. I am looking forward to May 14. I will prove myself in the ring.”

Abraham, who has only fought in the U.S. twice in his career, isn’t concerned with fighting in California, Ward’s home state.

“There is a huge Armenian community in Los Angeles, and I will put on a spectacular fight for them,” said the Armenian-born Abraham. “I am very grateful to have their fantastic support and I can already promise them a very special evening. It will be good to have their backing. It will give me a huge boost.”

Added promoter Kalle Sauerland of Sauerland Event: “This is going to be a fantastic fight. We have a lot of respect for Andre Ward. He is a deserving champion but he will be dethroned by the comeback King! Arthur has learned from his mistakes in the Froch fight. At Team Sauerland, we certainly know one or two things about comebacks, especially when it comes down to making the necessary adjustments. Mikkel Kessler, the Viking Warrior, lost to Ward but in his next fight he defeated Carl Froch on points. May 14 will be the comeback of King Arthur! He will surprise a lot of people – and he will stun Andre Ward!”

The Semifinals of the Super Six World Boxing Classic will continue just one week later on Saturday, May 21, when Froch (27-1, 20 KOs) defends his World Boxing Council (WBC) Super Middleweight title against Johnson (51-14-2, 35 KOs) at a venue to be named in the near future.