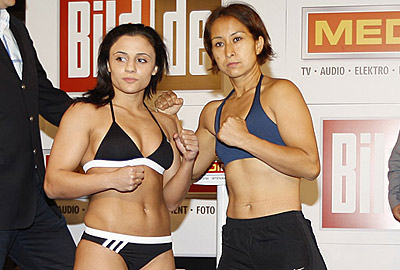 This is an eventful week for HyeFighter Susi Kentikian. After eight months in limbo caused by the termination of the TV contract between ZDF and her – now former – promoter Universum, the WBA/WBO/WIBF flyweight champion (27-0-0) will return to the ring to defend her belts against Ana Arrazola (19-5-3) of Mexico on Saturday 26th March.

The fight will take place at the Universum Gym in Hamburg, and will be broadcast live on the web via the website of the German newspaper BILD ZEITUNG bild.de. The fight will be shown at 10 pm CET on 26th March.

Kentikian will no doubt be very keen to erase the impression she left after her last two fights. She has admitted, that she performed below her usual standard in the fight against Nadia Raoui in April of last year. She won the fight, but not without controversy about the decision.

Her last fight against mexican Arely Mucino also ended in an unsatisfactory way for Kentikian. A clash of heads in the third round resulted in a long gash beyond Kentikian’s hairline. The bleeding could not be stopped, and the fight ended as a “no contest”. I am certain, that we will see a very determined Kentikian entering the ring against Ana Arrazola on Saturday.

Kentikian was in the news for other reasons this week. Her biography “Mir wird nichts geschenkt!” (“I don’t get anything for free”) was published Monday.

The book describes the heart rendering story about years of deprivation and fear for the Kentikian family as they lived as asylum seekers in Germany, until Susi’s prowess in the ring secured the family a permit to remain in Germany.

The book provides some very interesting views behind the scenes of professional boxing in Germany. Beside describing Susi’s boxing career, it book also gives an insight in her activities outside the ring such as charity work, her love of music and her views on politics. It is a great read. 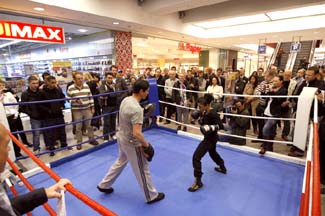