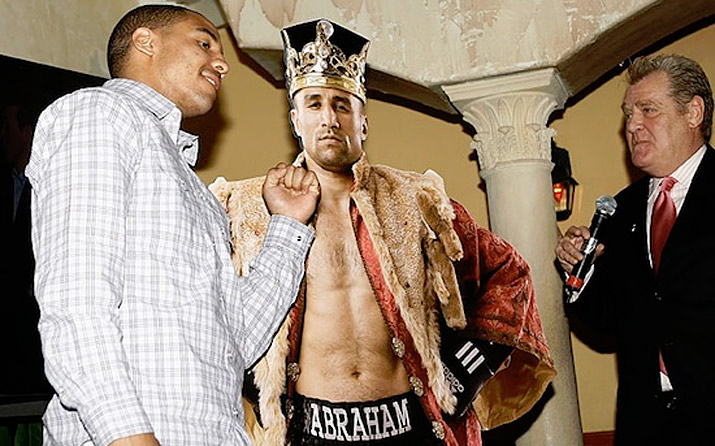 Super Six World Boxing Classic Semifinalists Andre Ward and HyeFighter Arthur Abraham participated in a press conference on Tuesday at Sisley Italian Kitchen in Sherman Oaks, Calif., to formally announce their May 14 showdown at The Home Depot Center in Carson, Calif., live on SHOWTIME®. Ward will defend his WBA Super Middleweight title against the Armenian superstar and former world champion to kick off the Semifinals of the groundbreaking tournament. Abraham, who is in the middle of training for the fight, was not able to attend the press conference from his home base in Berlin, Germany and joined via video conference.

The Ward-Abraham winner advances to the tournament Finals against the winner of the Carl Froch-Glen Johnson Semifinals showdown. The winner earns instant bragging rights as the world’s #1 168-pound fighter.

Abraham (32-2, 26 KOs) entered the Super Six as a favorite alongside Kessler. But after emerging from Group Stage 1 as the points leader with a knockout over Jermain Taylor, he is now trying to bounce back from consecutive losses to Andre Dirrell and Froch in Group Stages 2 and 3, respectively.

The event is co-promoted by Goossen Tutor Promotions, Antonio Leonard Productions and Sauerland Event and sponsored by Corona.

Tickets go on sale on Wednesday, March 30, and will be available for as low as $25, with VIP floor seats priced at $200. Other tickets in the 8,000-seat outdoor stadium at The Home Depot Center are available at $50 and $100. Fans can purchase tickets, starting on March 30, at all Ticketmaster outlets and online at www.Ticketmaster.com as well as The Home Depot Center Box Office (open Monday through Friday, 10 a.m. to 6 p.m.). Groups of 10 or more can purchase tickets by calling 1-877-234-8425.

“I’m looking forward to May 14 and having a great fight. I am feeling OK. I was a little sick but I just started training again and I should be fine.

“We are getting ready for a good fight. The tune up fight didn’t give me as much as I wanted but it was OK. It was good to get back in the ring and get that feeling.

“You’ll be surprised on May 14. It’s not my style to make big predictions. I want to show you inside the ring.

“I know he is the favorite but that motivates me even more. Over history many favorites have crashed down.

“I don’t want to speak about what went wrong in the past. I want to focus on Andre. I will use my heart, my fists, my body and my hands to defeat Andre.

“I feel confident in my trainer – I’m happy with him. If I wasn’t I wouldn’t still be training with him.

“I look forward to coming over to the U.S. I will give 120 percent. Together, with the Armenian fans, I will win the title and reach the finals.

“The Armenian fans will motivate me. That makes this fight more special for me. I will not disappoint them.