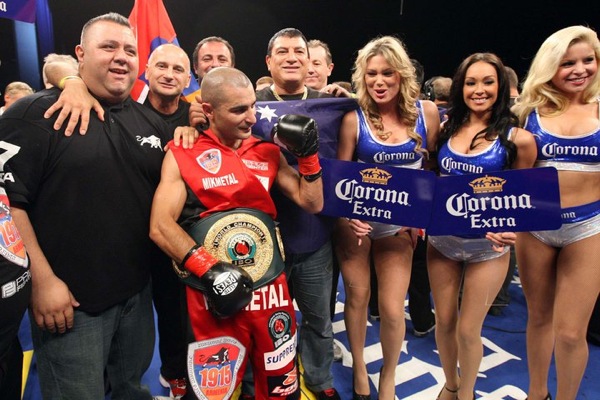 By MANOUK AKOPYAN from Yerevan Magazine

After a split-decision loss to Abner Mares back in December, critics were beginning to question whether 35 year-old Vic Darchinyan was reaching the twilight of his career.

On Saturday night at the Nokia Theatre in Los Angeles, the wily veteran put a stop to such talks and cashed-in on all of his pre-fight promises by ending his fight versus Yonnhy Perez with a technical decision, and in the process, winning the IBO bantamweight title.

Dr. Paul Wallace stopped the fight at 1:07 of the fifth round after an accidental head butt opened a cut between the eyes of Perez. HyeFighter Darchinyan (36-3-1, 27 KOs) was extremely aggressive from the onset as he dominated a listless Perez (20-2-1, 14 KOs). With the fight official after four rounds, Darchinyan won by the identical scores of 50-44 on all three judge’s cards.

Reverting back to the “old Vic” style of brawling and bashing – rather than boxing, he bullied Perez throughout the bout with numerous blows, combinations and power punches to the head. Darchinyan also knocked down Perez in the second round with an uppercut.

“I wish the fight did not stop because I felt like I was going to knock him out,” said Darchinyan. “Perez felt – and is still feeling – my power. I think I gave him enough in five rounds to last as if it were 20. Everyone saw it. I was demolishing him. Maybe it’s better for him the fight was stopped.”

Darchinyan used the night and his national platform on the Showtime-televised bout to commemorate the Genocide when he and his entire team walked into the ring wearing shirts in remembrance. The beltline of his trunks had “1915” written across them and he further delivered the message in a post-fight interview in the ring, and later, at his press conference.

“April 24 is a very special day for all Armenians around the world. Hopefully, I have made it a little better and put a smile on their faces. I want to thank everyone for their love and support.”

The victory puts Darchinyan back into the bantamweight picture – if he chooses. Over the course of the last two weeks, he has stressed numerous times that he will move up to 122 or 126 pounds if he’s not matched with the proper opponent at 118. Those opponents would both be in the form of rematches, either with Mares or Nonito Donaire, his first defeater.

“Vic was sensational tonight,” said Gary Shaw, Darchinyan’s promoter. “He’s always magnificent when he’s coming off a loss. He comes back better and that’s what happened again tonight. I respect Yonnhy Perez very much for taking all of Vic’s punches, because Vic maintained he was stronger than ever and he was right. He was an animal tonight.”

Shaw says that while he plans to petition the IBF to sanction an interim title fight for Darchinyan, and in the process give him the rematch against Mares he badly craves. If that doesn’t work out, his performance against Perez has now given him plenty of options.

“Showtime has been wonderful to Vic and has given him so many opportunities to shine like he did tonight. I think that based on his performance, not just that he won, but the excitement and the power he showed, I believe he’ll have his choice of who to fight next. Vic Darchinyan is back in a very big way.”

Junior welterweight HyeFighter Art Hovannisyan was dominant in his dismantling of Jose Alfredo Lugo as he kept his record undefeated with a fifth round TKO Saturday night.

Switching back and forth from southpaw throughout much of the fight, the 25-year-old Hovannisyan displayed blazing hand speed and lightning counter punches. After a knockdown, Referee Zac Young had finally seen enough carnage and mercifully ended Lugo’s night at 1:57 into the fifth round of a scheduled six-round bout.

“I felt great in there,” Hovannisyan said afterwards. “I was coming back from 10 months off, but I had no problems picking up where I left off.”

The fight was a rematch of a September 2008 bout between the two, a unanimous decision win by Hovannisyan. Lugo is now 1-11-1 after that fight. Hovannisyan, who credited Lugo with a good chin, opened a cut above Lugo’s right eye with a left hook in the second round.

Hovhannisyan, co-promoted by Gary Shaw Productions, has had over 250 amateur bouts and captured numerous titles as an amateur.

HyeFighter Azat Hovhanesyan lost his professional debut in a four round war with Juan Reyes (1-1) in what was perhaps the most entertaining fight of the night.

Hovhanesyan had a very strong performance in a wild brawl, but it wasn’t enough to keep him from losing on the card of all three judges (40-36 twice, 38-37).

With a tear in his blackened eyes, Armenia’s former European junior champion spoke about disappointing his fans. “I feel terrible for letting them down. He (Reyes) was a strong fighter and because I was making the jump from amateur to pro he surprised me. I will be back.”

Flying (and connecting) fists were at a premium as defense took a back seat in this junior lightweight bout. At one point, Showtime broadcaster Al Bernstein shouted, “Can you believe this fight?”

Hovhanesyan’s performance, regardless of win or loss, gained the 22-year old a ton of fans as the appreciative crowd went into frenzy.

Hovhanesyan is expected to go back to Australia and train under the tutelage of Vic Darchinyan.

HyeFighter Vito Gasparyan scored a fifth round TKO over Trenton Titsworth in a sloppy, one-sided fight.

Gasparyan, when not being held, worked the body through much of the fight and connected with leaping punches of the considerably taller and longer Titsworth. Titsworth was ripped by his corner throughout the entire fight for, of all things, not fighting.

Referee Jack Reiss took a point away in the third round for excessive holding before stopping the six-round scheduled fight at 2:31 into round five.

PICTURE GALLERY FROM THE FIGHTS: