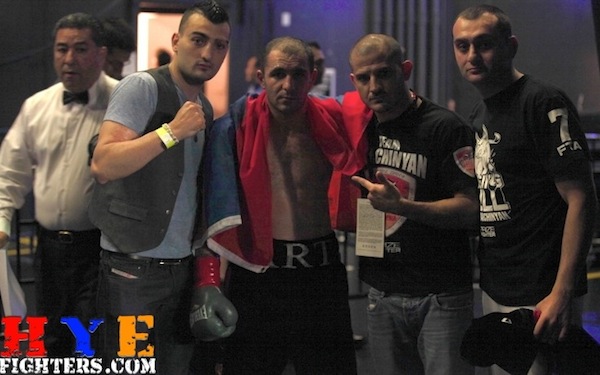 The opening bout of Gary Shaw Production’s outstanding “Showdown in the Valley”, a ShoBox: The New Generation tripleheader broadcast from the Chumash Casino Resort in Santa Ynez, California, on June 10 has been announced. In a battle of unbeaten junior lightweights, Albuquerque, New Mexico’s Archie Ray Marquez will face Glendale, California, via Gyumri, Armenia’s Art “Lionheart” Hovhannisyan in an eight-rounder

29-year-old HyeFighter Hovhannisyan (13-0-1, 7 KOs) returned from 10 months off to score an impressive TKO 5 over veteran Jose Alfredo Lugo on the undercard of his countryman Vic Darchinyan’s victory over Yonnhy Perez at the Nokia Theater in Los Angeles on April 23. 22-year-old Marquez (12-0, 8 KOs) was last seen scoring a unanimous eight-round decision over Las Vegas native Johnny Frazier at the Santa Ana Star Casino in Bernalillo, New Mexico on April 2.

Hovhannisyan vs. Marquez will serve as the televised opener in a night that features some of the most exciting prospects in boxing including bantamweight power puncher Chris Avalos and cruiserweight smasher Lateef “Power” Kayode in separate bouts.

“Their styles dictate that this will be an action fight. Both of these fighters can punch and neither of them likes to fight going backward. It’s a great match-up to start a great night of boxing.”

On fight night, the first fight will begin at 5:30 pm Pacific time. Tickets are priced at $35, $45, $55, $70, and $85 are available online at Star Tickets. The Chumash Casino Resort is located at 3400 East Highway 246 in Santa Ynez. For more information, visit www.garyshawproductions.com. For more information about the Chumash, call (800) 248-6274 or visit www.chumashcasino.com.