HyeFighter Darchinyan Responds To Arce Calling Him Out 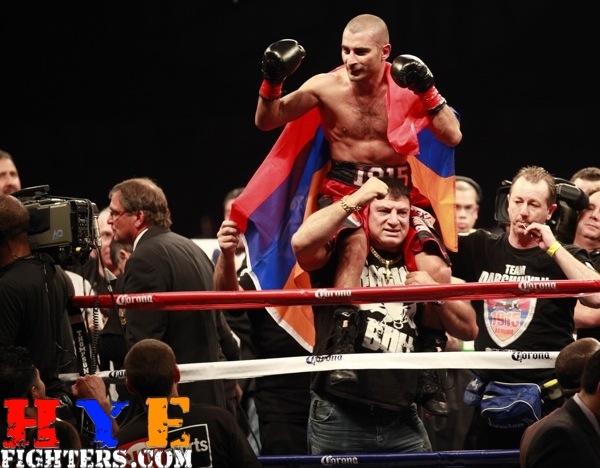 Vic Darchinyan talks about Jorge Arce who challenged him after his victory over Wilfredo Vasquez, Jr., to capture the WBO 122 pound title in Las Vegas on Saturday. “I think Jorge Arce must be crazy. He went and challenged me straight after his win. Does he think I am Vasquez, Jr., who is going to stand there in front of him and do nothing? I will punish Jorge more than I did when I fought him last. He thinks he is the only one who has improved by not making 112 and 115. I was very happy for him yesterday because he is a true Mexican warrior that always comes to fight.”

“I thought he was big chance against Vasquez but it will be a different story if we fight again. There is no more boxing, only power and I will make sure that if I fight him again it wont be a technical knockout but the knockout of 2011, he will feel like he has been hit by a truck the next time we are in the ring.”

“I am not waiting for Mares and Donaire to see what is going happen with their careers. Abner is waiting for Agbeko’s back to get better and Donaire is in court fighting for who his contract is with. I need to stay active, I need to be in the ring this July or August. I don’t care who I fight, as long as I am fighting. I want to win titles and I want to fight for my fans. If all these champions keep waiting to fight it’s very bad for our sport. If no one will fight me, I will even go fight MMA earlier than I wanted to, I have been wrestling training for the past 6 months to improve my core fitness, I just want to fight and be active.”

“That’s why I was happy when Jorge Arce called me out. He is very much the same as me, we fight for our fans. I just want to give a message to Jorge Arce: it’s okay to stand in front of a camera and call me out with your team behind you but if and when we fight it will only be you and me in the ring, and I promise you and all my fans, I will punish you, knock you out cold and retire you.”