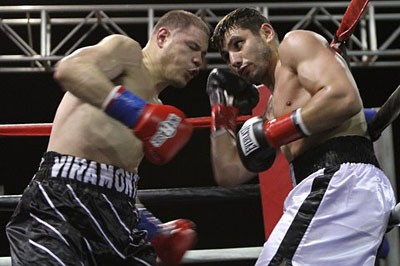 By MANOUK AKOPYAN from YEREVAN Magazine

The heater was cranked through the roof at the Goossen Boxing Gym in Van Nuys, Calif. last Saturday as HyeFighter Armen Ovsepyan prepared for his upcoming fight on the Arthur Abraham vs Andre Ward undercard on May 14. Inside the ring, Ovsepyan (10-1, 8 KO’s) brought the sweltering heat himself, training in preparation for his fight against Mexican Arthur Brambila at The Home Depot Center this Saturday.

The Armenian-born welterweight has a colorful amateur background of over 300 fights with countless awards and medals. Ovsepyan turned pro in 2008 and has been steamrolling through opponents since losing his professional debut in a four round majority decision. He is coming off a third round TKO of Alex Viramontes in April.

“Armen is a very special fighter. He has tremendous talent and ability, and is always looking for a way to win. The only way he will lose if he is dead. That’s his mentality,” says his manager, Alex Vaysfeld of Union Boxing Management. “He is showing all the signs one would look for in a future champion. In the ring, he is calm, relaxed and has great mental toughness. He has the full, multi-dimensional package. And that’s saying a lot, because I’ve been in the boxing business my entire life.”

Ovsepyan, who has lived in the Russian far-east peninsula of Kamchatka since the age of eight, has been living the last nine months in Northridge, Calif. with a handful of other boxer’s under Vaysfield’s watch.

This will be Ovsepyan’s fifth fight in the U.S., after he fought six in Russia and one in Finland. He’ll have trainer Joe Goossen in his corner for Saturday’s four round scheduled bout. Goossen has trained such world champions as Sugar Shane Mosley, the Ruelas brothers in Gabriel and Rafael, the late Diego Corrales, and Riddick Bowe.

“Boxers in America are stronger here than in Europe, and that’s why the big-name boxing world is in the United States. And that’s why I’m here, and where I want to be headed,” Ovsepyan said.

Fighting in the welterweight division (147 pounds) that includes such names as Manny Pacquiao, Floyd Mayweather Jr., Victor Ortiz, Andre Berto, and Mosley, Ovsepyan shouldn’t have any trouble making a name for himself in this loaded division should he continue on with the path he’s on now.

On Saturday, he’ll have the honor of fighting on the same card of one of his favorite boxers growing up in another weight division, fellow countrymen Arthur Abraham.

“I was a little kid in Russia watching his fights,” Ovsepyan says. “I looked up to him while growing up. He is a great fighter who will have a hard, challenging fight ahead of him with Andre Ward. I will definitely be rooting for Abraham, and hope he wins.”

Yerevan Magazine will be ringside for on May 14 reporting from press row.

Tickets are available for as low as $25, with VIP floor seats priced at $200. Other tickets in the 8,000-seat outdoor stadium at The Home Depot Center are available at $50 and $100. Fans can purchase tickets at all Ticketmaster outlets and online at www.Ticketmaster.com as well as The Home Depot Center Box Office (open Monday through Friday, 10 a.m. to 6 p.m.). Groups of 10 or more can purchase tickets by calling 1-877-234-8425. The event is co-promoted by Goossen Tutor Promotions, Antonio Leonard Productions and Sauerland Event and sponsored by Corona.