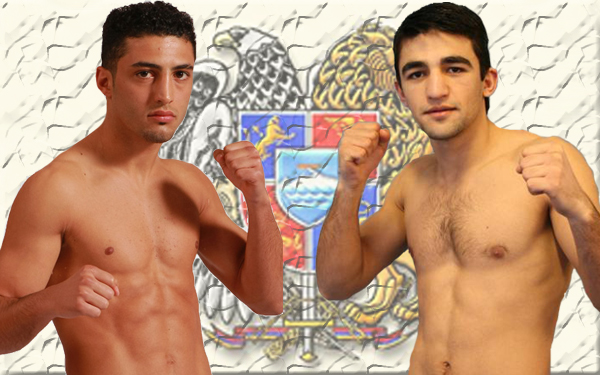 El Hadj’s ACTING job in France takes the WIN away from HyeFighter Giorgio Petrosyan by declaring the fight a NO CONTEST. A complete BS Decision!!!!!

Here is the play by play:

Round 1: Trading jabs and lg kicks early. Chahid is looking to score with a middle kick but Petrosyan lands the first considerable shot with a jab. A cross shortly after. Jab off Chahid’s forehead from Petrosyan. Petrosyan catches a kick and brings El Hadj to the floor with a cross – not a knockdown though, of course. Great knee from Petrosyan a little less than half way through the round. We’re into the final minute of the opening round and Chahid has been able to land some leg kicks thus far. A hook or two may have also snuck in though nothing has landed clean. Petrosyan is just backing away and El Hadj’s hook is hitting air. Knees from Petrosyan late in the round. 10-9 Petrosyan.

Round 2: Action early in the second and Petrosyan is still in command. El Hadj throws the hook? Petrosyan makes him miss. Chahid is stil willing to move forward though. Halfway through the round and El Hadj landed his most significant punch of the fight, great little uppercut that sneaks in. He moves forward but Petrosyan fends off the attack. Petrosyan’s right cross is just coming right in on El Hadj. Late in the round and Chahid is searching for body shots, gets a couple in there. Best way to summarize the boxing: Petrosyan is throwing jabs and crosses, El Hadj is coming with hooks.. you know how that goes. Petrosyan 10-9 again.

Round 3: El Hadj opens the round up with a big uppercut, little more action and we’re paused because of a low blow. 2:30 and they’re mixing it up a bit. Chahid throws a big hook, Petrosyan makes him miss and catches him with a cross. El Hadj actually falls out of the ring, seeming to be because of a low blow that nobody else saw the first time around. Okay, Chahid is up but they are legitimately walking him to the back stage area. He’s done. Interesting stuff to say the least.

Official Result: The bout is declared a no contest.

Round 1: Jabs and crosses early, Grigorian throwing a bit crisper combinations but both looking solid. Grigorian struggling to get his cross through Lidon’s guard, working with a sound hook around 1:40 though. Halfway through the round and he’s going to the body now. Low kicks from Lidon, he’s ending combinations that way and scoring well. More leg kicks from Lidon and Grigorian continues to score with his hands. About what should be expected. I’d give it a 10-9 to Lidon, but very, very close.

Round 2: Grigorian back to work and Lidon brought to the ground after a leg kick. Lidon is landing well with his leg kicks and naps Grigorian’s head back with a jab in the first minute. Around 2:00 and Grigorian to the body. A lot of trading throughout the round but Grigorian gets the better of it. 10-9 Grigorian.

Round 3: Lidon with a head kick immediately and Grigorian is down! He’s back up, Lidon swarming. All sorts of combinations, jumping knees. Grigorian has survived now though. Wow, what an opening. Grigorian still looks to have crisper punching but Lidon is holding his own in that arena as well. 10-8 for Lidon.

Round 4: Lidon lands a stiff jab early. He’s working the push kick, sweeps Grigorian. Lidon also catches Grigorian with a counter cross, nothing too major though. Another head kick glances off Grigorian. Leg kicks from Grigorian, but they pale in comparison to what Lidon does in that arena. Grigorian has Lidon backed into a corner about halfway through the round and is landing well. Lidon gets out of the corner, right hand from him around 1:15. Combination punching from Grigorian at 1:00, big right hands. Lidon is countering effectively though, impressive in that regard. He’s still looking for the head kick and works some knees around :40. Push kick late from Lidon, Grigorian lands a real nice leg kick to end the round. Close but definite 10-9 to Lidon.

Round 5: Grigorian isn’t doing enough to win this. Lidon’s defense is too sound for what Grigorian is throwing – the Armenian is going to the body a bit though, which is promising. This isn’t enough though… Lidon won this fight.

Yohan Lidon vs. Marat Grigorian from rob cib on Vimeo.