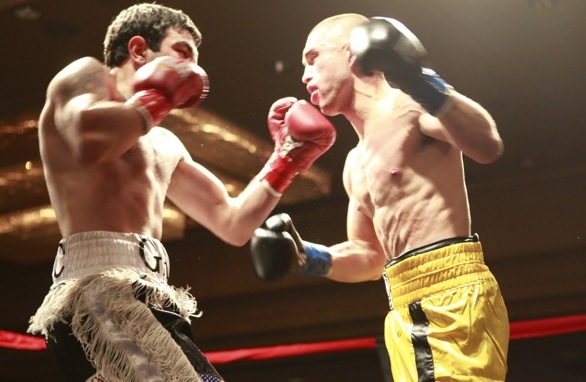 By Gabriel Rizk, From the Glendale News Press

WOODLAND HILLS — Avoiding a loss was of little solace to Gabriel Tolmajyan on Friday night.

Putting on the most action-packed fight to grace the Woodland Hills War 4 card at the Warner Center Marriott, the HyeFighter, who trains at the Glendale Fighting Club, and his opponent Juan Suazo battled to a six-round draw in their co-main event lightweight bout.

Tolmajyan said through an interpreter that he was disappointed in the result and thought he had won the fight.

A deep cut opened next to Suazo’s left eye in the third round slathered both fighters in blood for the remainder of the bout, which saw numerous exchanges of combinations but far too much of Tolmajyan fading back into the ropes under Suazo’s offensive.

“I thought we had the fight, four [rounds] to two,” Tolmajyan’s corner man George Bastrmajyan said. “[Suazo] was putting pressure on him, but he wasn’t really connecting on punches. He was just aggressive and throwing a lot of punches at him, but if you look at the fight, Gabe clearly landed the more effective punches.”

Tolmajyan (10-1-1), a southpaw, had early success landing two-punch combos, right to left, but in the second round, Suazo (7-4-3) became more aggressive and began to dictate the fight.

Early in the fourth round, Tolmajyan was thrown to the mat – it was not ruled a knockdown – and responded with right flush to Suazo’s wound. But, as he did for much of the fight, Sauzo maintained enough volume punching to keep the fight even on the cards.

With blood pouring from a cut he sustained via head butt in the final round, Tolmajyan continued to battle, but couldn’t put together the decisive round to put him over the top.