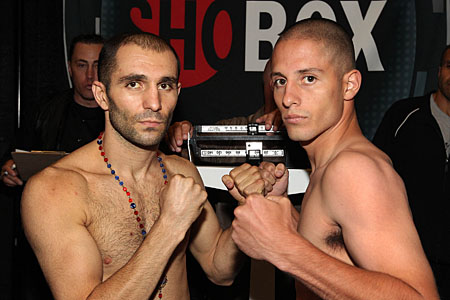 “I don’t watch tape. I don’t need that. I don’t like it. I will stop him with pressure. I can drive him back and I will come forward. I can box and I can fight. It’s as simple as that.

“After I win I don’t think this should be called an upset.

“I think (Archie Ray) is better than the guys I’ve fought but he doesn’t have that many skills. When he goes up against someone like me who can box and move and punch then it’s going to be a quick night of work.”

“The first time I was on ShoBox against (Derrick) Campos I was a little nervous because it was in New Mexico and I just wasn’t aggressive. I showed what I could do against (Juan) Santiago.

“(Art) is a pretty tough guy. From what I hear he’s slow. You’ll see a lot of different looks from me.

“I have no issues injury-wise. I’m only 22 and can see myself knocking on my door and can be a Top 10 contender after this fight.

“I’ve been working most on my defense. I’ve gotten hit on stupid shots and punches I shouldn’t have got hit with.

“I like to change it up. I don’t like to do the same things over and over. Against Santiago I used my angles and put a lot of pressure on him.

“Winning comes first. It’s important to be exciting and I can be.”