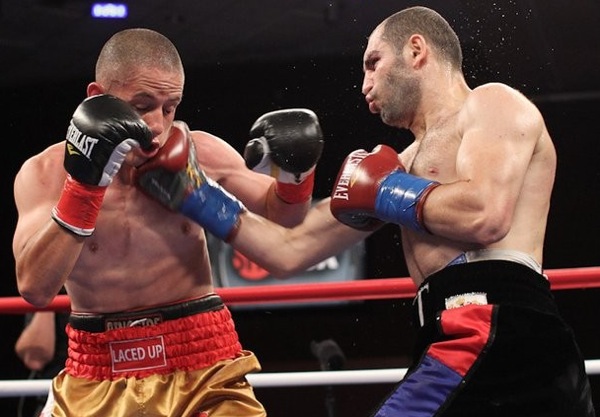 HyeFighter Hovhannisyan Destroys Marquez, Then Knocks Him Out

In a battle of unbeaten lightweights, HyeFighter Art Hovhannisyan (14-0-1, 8 KO’s) overwhelmed Archie Ray Marquez, dropping him a total of four times to earn a sixth round KO victory. Hovhannisyan dropped WBA #11 Marquez (11-1 1NC, 7 KO’s) once in the first, third, fifth, and finished matters with a devastating right-left combination to the head. Time of the stoppage was 1:03 in the 6th.

The fight between Art Hovhannisyan (14-0-1 8 KOs) and Archie Ray Marquez (12-1, 8 KOs) sparked the crowd to life with a bout filled with the brutal boxing action they all paid to see.

Hovhannisyan scored knockdowns in the first two rounds, taking the fight to Marquez from the moment the opening bell rung — much to the dismay of the pro-Marquez crowd.

Hovhannisyan recorded his second knockdown after he followed his left hand with a shove of a right hand.

In the third round both fighters traded blows with Marquez beginning to land some of his own which did not seem to bother Art at all.  The second round easily created the most crowd-pleasing action of the evening.

Still, Marquez easily took more shots, and retaliated with non threatening punches of his own and was completely taken out of his game.  I guess, he (Marquez) will need to rethink about making the statement that he thought Art was too slow.  On the contrary, Hovhannisyan was the quicker, and more importantly the more accurate puncher.  Art’s power shots caused damage and seemed to hurt Marquez at every pass.

Marquez went down again in the fourth round, and started to look more like a desperate fighter looking for that one punch knockout as he was too far behind on points. 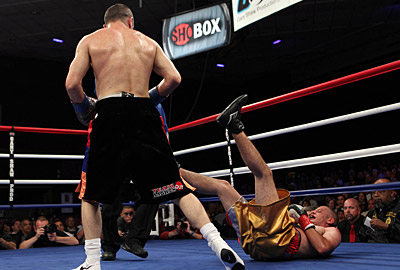 Then Armenian Hovhannisyan smelled blood in the water, and after many in the room could feel it coming, Hovhannisyan finally put a ribbon on his masterful showing with a lightning bolt of a left hook.

Instantly Marquez dropped to the mat, and along with it, fell from the ranks of the unbeatens with his first professional loss coming at 1:06 of the sixth round. 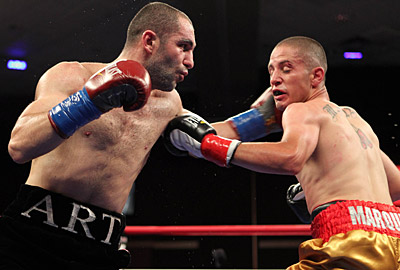 HyeFighter Art “Lionheart” Hovhannisyan won and made a statement.  There is a reason he is unbeaten!!!

“I told everyone, in a couple of rounds, I can teach him how to box and then stop him,” said Hovhannesyan, who knocked down Vasquez four times in the bout. “And I did that.” 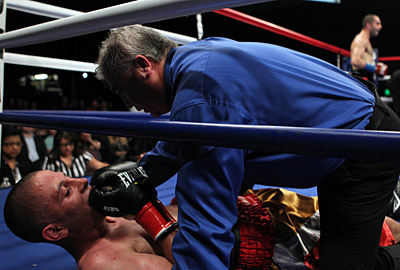