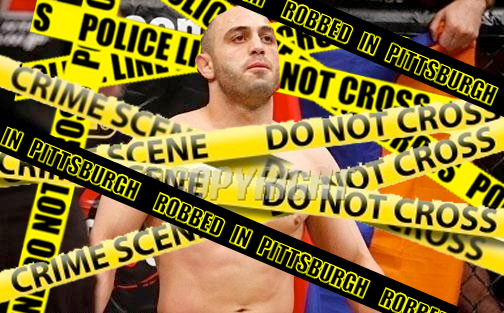 Simply put….Griffin gets a GIFT in Pittsburgh. PERIOD!!!! I am not able to see how and why the judges scored the way they did and the referee for that match needs to have his license suspended (not so much for his inaction in the Gamburyan fight, rather his inability to govern an MMA match in his previous two fights.  I am sure we will be hearing more about this soon).  To be clear, we did NOT see this fight with Manny losing anything but maybe the second round.  We believe the scoring was inaccurate and the officiating amateurish at best!!!

Gamburyan started strong with a takedown early, and then used that to transition into a standing guillotine. Gamburyan was unable to finish Griffin at that point because Griffin was attempting to break Gamburyan’s tight grip by pulling on his fingers.  Something that Gamburyan had to point out to the referee during the match.  No warning was given to Griffin  so Gamburyan simply tossed Griffin to the ground, and took his back as Griffin stood up. Gamburyan then moved off his back, and finished the round clinching against the fence.

The two got into several violent tangles in the second round, exchanging several big strikes. In one of those dust-ups, Griffin threw an inadvertent shot to Gamburyan’s crotch, pausing the fight for a moment as Manny recovered, and again NO WARNING by the official. It happened again near the end of the round, and this time, Gamburyan seemed upset by the stoppage.  The referee gave Griffin a “Soft” warning.  What is a “SOFT” warning?

In the third round Gamburyan slammed Griffin, and controlled him.  All that Griffin did effectively in the entire match was kick Gamburyan’s lead leg.

It is judging and officiating like this that take away from the sport. At any level.