HyeFighter Martirosyan Looking At Other Fights 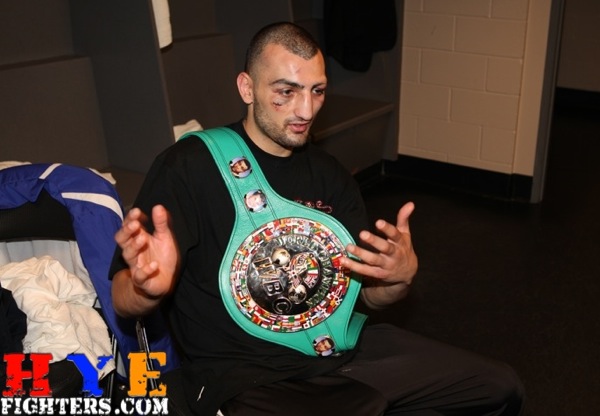 Undefeated junior middleweight HyeFighter Vanes “The Nightmare” Martirosyan (30-0, 19KO’s) is looking to secure a major fight this fall. The WBC’s top rated 154-pounder had his sights set on a Mexican Independence Day show down with Mexican star Saul “Canelo” Alvarez but that might not come to fruition any time soon. “Canelo and I would be a big fight at STAPLES Center. The place would be full of Mexican and Armenian fans. His style and my style go together perfectly and would give the fans the fight that they want to see,” said Martirosyan. Indications are that Alvarez will not face the Glendale, California, based fighter this year. With that news, Team Martirosyan is moving on and there are plenty of options in the loaded junior middleweight division.

Martirosyan’s manager Steve Feder indicated that Alvarez won’t face Martirosyan until it is forced by the WBC. “We can’t keep wasting time on Alvarez. We thought we would get ‘Canelo’ in September but he won’t fight us until he has to and even then he will try to find a way out. I don’t blame him. If I was his manager I wouldn’t want him to fight Vanes either,” said Feder.

WBA champion Austin Trout, Miguel Cotto, IBF champion Cornelius “K9″ Bundrage, WBO champion Sergiy Dzinziruk and Sergio Martinez are all on Martirosyan’s wish list, “Vanes has a history with Austin Trout in the amateurs. We would like that fight. We know Cotto is already committed to fighting Margarito so that is out for now. ‘K9′, Sergiy and Sergio Martinez are all guys would we love to fight,” Feder revealed.