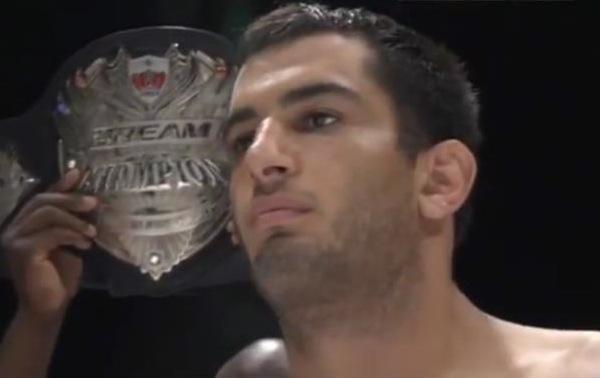 HyeFighter Gegard Mousasi says he’s “definitely” intrigued by the possibility of a move to the UFC, but he also plans on getting his Strikeforce light heavyweight title back first.

“If you’re the Strikeforce champion, then you have a lot more possibilities,” Mousasi said on the Sherdog Radio Network’s “Beatdown” show. “I still have a contract with Strikeforce. It makes sense to be a champion there before something like fighting in the UFC can happen. But I don’t know. I’m just focusing on Strikeforce, and eventually it’s not my decision. I just need to keep winning my fights. That’s the most important thing.”

Mousasi said he has two fights left on his Strikeforce deal. He expects to compete on the Dec. 17 card headlined by Gilbert Melendez’s lightweight title defense against Jorge Masvidal, but he doesn’t know his opponent yet.

One foe that comes to mind is Ovince St. Preux.

“I heard he would like to fight me,” Mousasi said. “I don’t know him. I’ve never seen his fights, but he has done very well with Strikeforce. If Strikeforce decides it’s a good fight and the people want to see it, I’m open to it.”

Mousasi drew with Keith Jardine in his most recent Strikeforce bout. He bounced back in Japan in July, though, stopping Hiroshi Izumi at Dream “Fight for Japan.” His current Strikeforce deal allows him to fight in other promotions, but if he ever moves to the UFC, an exclusive agreement is much more likely. Mousasi said he’s open to an exclusive contract if he can get at least three fights a year.

“I can be OK with three fights, but it all depends on negotiations about the contract,” he said. “This is how things are now. I understand that.”

Mousasi likes to stay active, but his philosophy at this point in his career has changed somewhat.

Most of those opponents are in the UFC. Mousasi is willing to make the move, even though an exclusive deal would also likely end his kickboxing and boxing aspirations for now.

“I think eventually everyone will end up in the UFC if you want to be considered one of the best,” Mousasi said. “I’m very open for that, but it’s not really up to me. It depends on if they would like me in the UFC or not, but I’m open to that. … Maybe later on I can try something in boxing, but at this moment, it’s not really realistic. K-1 is not doing well [either]. The only thing around is MMA. That’s what I need to focus on. I’m leaving all of the other stuff around and just focusing on MMA.”