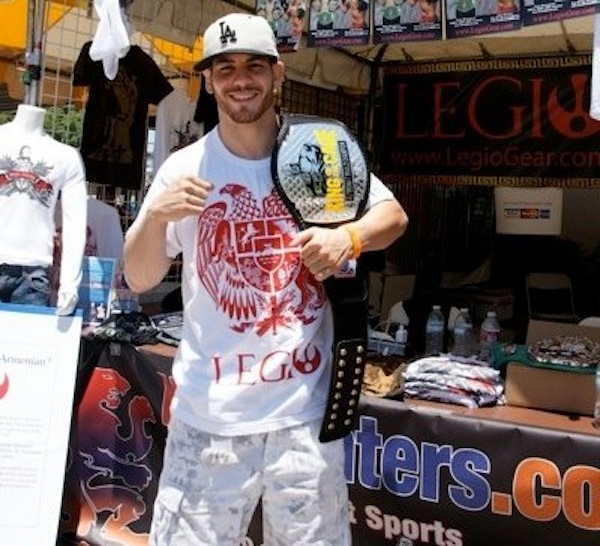 There weren’t many who thought HyeFighter Jared Papazian (13-6) would win when he stepped into the cage this past June and challenged then champion Abel Cullum (18-5) for the King of the Cage Flyweight Championship. But while Papazian walked in as the underdog he walked out with title gold and the gratification of knowing that he had realized a dream that had eluded him for so long. He was finally a champion.

Now, in order for Papazian to continue to live out his dream of being champion he must successfully defend his title and thus find a way to beat his currently undefeated opponent.

This Thursday, September 15, Papazian will take on Marvin Garcia (6-0) in his first title defense at King of the Cage: First Defense LIVE from San Manuel Casino in Highland, Calif.

ProMMAnow.com’s Josh Cross spoke with Papazian earlier this week about his upcoming fight, what it was like to become the flyweight champion, and why he wasn’t very impressed with Garcia’s last fight.

PRO MMA NOW: Starting off can you talk about your last fight on June 24 where you beat Abel Cullum to become the new King of the Cage Flyweight Champion and what it was like to win the belt?

JARED PAPAZIAN: Yeah man, that was an awesome fight. It was a war with Abel and it went the distance. He’s a tough, tough cat. He kept trying to take me down, but he couldn’t take me down. I was trying to knock him out but he won’t go down so it went the distance. It was the most amazing feeling [to win the title]. After they put the belt on me I cried and with my team is was just the best feeling ever. I worked so hard for that fight and now I’m here to defend my belt in my hometown and I can’t wait for that come Thursday.

PRO MMA NOW: Now your fight with Abel was very close and you ended up winning the decision 48-47. What was going through your mind as they were reading the decision, and did you think you had won?

JARED PAPAZIAN: I thought it was very close, but I thought that I had the upper hand because I was out striking him and then he wasn’t able to take me down. I mean he took me down maybe twice in the whole fight, but when he did take me down I reversed it and I was on top. So I thought that I did enough damage to win the fight, but it was close. It could have gone either way.

PRO MMA NOW: Moving on to your upcoming fight this Thursday, can you talk a little bit about your training camp and how that has been going?

JARED PAPAZIAN: I’m fighting Marvin Garcia. He’s undefeated at 6-0, and he’s the number one contender. He’s a wrestler so pretty much I’m working on a lot of my wrestling. Just pretty much the same thing that I’ve been training and working on for a while now. So I’ve been working on just defending takedowns and submission defenses and stuff like that. I’ve also been working on my strengths, which are boxing and kickboxing as well.

PRO MMA NOW: Now you mentioned that Garcia is undefeated. How did you approach making a game plan going into this fight seeing as how there really isn’t a blueprint to defeat him since he hasn’t been beaten yet?

JARED PAPAZIAN: When I came back from Oklahoma after I fought Abel there was a fight here at San Manuel Casino where [Garcia] fought Shad Smith. I have fought Shad before so I wanted to go and check that fight out. I wasn’t too impressed [by Garcia], but he throws everything with bad intentions. His cardio wasn’t that up to par, but that can come up with any improvement. He can improve on that, but I hope that he does come well prepared and gives me the best Marvin Garcia on Thursday night.

PRO MMA NOW: Now you have more fights than Garcia and between you two you’re the only one with experience in the fourth and fifth championship rounds. How much of a factor do you think experience will play in this fight?

JARED PAPAZIAN: It’s going to play a huge factor. He has never gone past three five-minute rounds. He did three five-minute rounds his first time, which was last month and he gassed out. I’ve done two title fights in the last six months and I went the distance in my fights with Jimmie Rivera and Abel Cullum. My first time I did OK, but the second time was better. Now I know that I’m well prepared. Now I know what to do to be able to do those five [rounds]. I don’t think Garcia knows what he is going against with the five, five-minute rounds. It’s a lot harder than what people think.

PRO MMA NOW: Moving beyond this fight for a second, where do you want to see your career at in the future?

JARED PAPAZIAN: I’m hoping that once I win this fight that I will be able to get the UFC to knock on my door.

PRO MMA NOW: What would you say would be the best way for fans to stay updated with what you’ve got coming up in the future?

JARED PAPAZIAN: I do have a Twitter (@jackhammer135). I’m not on it much, but after this fight I’m going to start Twittering more and stuff like that. I also have a Facebook that fans can reach me at as well.

PRO MMA NOW: Are there anyone you want to thank or give a shout-out to?

JARED PAPAZIAN: Yeah, I want to thank everybody at my team at Gracie Barra with Alberto Crane, Santiago who is my kickboxing coach, Seth who is my boxing coach at PKG, my manager Darin Harvey, my strength and conditioning coach Leo, my wrestling guys that I train with that help me with every fight, Ando Dermenjian at Golden Boys, and Joey Alvarado at SoCal MMA.

Tickets are still available for King of the Cage: First Defense, which is a 21 and up show, and can be purchased through Ticketmaster.com.