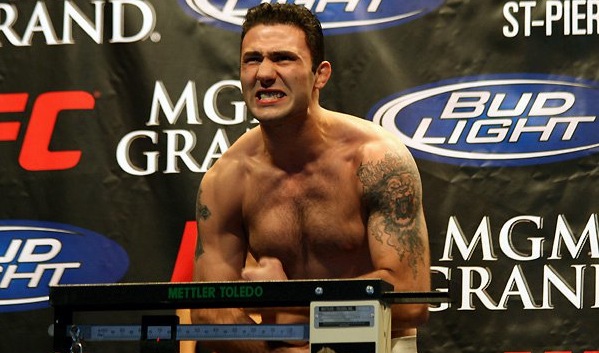 It’s been a long road for HyeFighter Karo Parisyan. After public battles with anxiety and pain killer addiction the judoka says he’s finally escaped the demons that once crippled him. As he readies for a bout against Jordan Smith at Amazon Forest Combat, Parisyan spoke to MMA Nation about his past, present, and what he hopes is a very bright future.

Sep 13, 2011 – Karo Parisyan wants you to know that his story is far from over. That it was never meant to end with exile to the footnotes of history, but rather the triumphant return of a champion. Of course, the idea is somewhat dubious. Once at the crest of the UFC’s welterweight division, Parisyan’s fall from grace was as remarkable as it is tragic.

After three years buried under anxiety and addiction, the 29-year-old has reemerged. This time he says he’s a man with a renewed purpose. Parisyan has rededicated himself to the sport of mixed marital arts, and is throwing himself into training for an upcoming fight against Jordan Smith at Amazon Forest Combat’s inaugural show in Brazil.

Still, he knows that a win will only mark the first step of a difficult comeback trial.

“I take one fight at a time right now,” Parisyan explains. “The ultimate goal is to go back to your roots. But I think everything comes with hard work, and if I want to get to that point then I have to work for it.”

“It’s going to take some time because that wasn’t reality for a couple years, with anxiety attacks, panic attacks, all these problems. People talking about pain medications. All this stuff that happened, it really dropped me down.”

His current self-awareness is a departure from the brash youngster who took the UFC by storm in the mid-2000’s. Led by swagger and an unrivaled aptitude for the art of Judo, the legend of Karo Parisyan grew quickly in the early days.

But disaster inevitably loomed over the horizon. Lost in the barbs of fame, Parisyan fell hard to the syndrome of ‘too much, too soon.’ “You’re making the money. You’re fighting. Fame. Everything. You’ve got women, cars, houses, that celebrity lifestyle.”

As the fighter’s career stifled, so too did his mounting escapism. Parisyan was cut from the UFC for the first time in early 2009 after a string of drug-related incidents, capped by an abrupt withdrawal from a match against Dustin Hazelett. At the time, longtime friend UFC President Dana White wrote that the judoka would “not be fighting Saturday or ever again in the UFC!!”

Nineteen months later, following a victory over Ben Mortimer — his first fight since being released — Parisyan received an uncommon gift in this unmerciful sport: a second chance. Assured the Armenian was finally healthy, White again signed Parisyan to a three-fight contract intended to mark the beginning of a new chapter.

Yet Parisyan’s struggles persisted behind closed doors as a return UFC bout against Dennis Hallman drew near. THe result was a listless performance that saw Parisyan get knocked-out in the opening minutes of the first round in front of a sold-out crowd at Auburn Hills, Michigan. According to White, the embattled fighter was cut on the spot, his second chance yanked before it had truly begun.

“It was pretty sad. Getting a three-fight contract then getting cut,” Parisyan says with resolve. “I have a relationship with Dana, I’ve always been somewhat of a friend and buddy with him, but when it came down to business, I screwed up on my end in a couple places. I was just bad for business all of a sudden,” Parisyan continues. “You have to look at it from a different perspective. Whatever you do, you’re going to pay a consequence for it.”

As he laid face up on the mat that night, his vision hazily fixed to the rafters, his heart pounding out of his chest, Parisyan fell into his darkest hour. That waning moment seared into his mind, now serves as a reminder of the nadirs Parisyan must acknowledge.

“I do not want to screw up to a point where it’s going to put me in a freaking casket,” Parisyan gravely explains. “My entire life, my slogan has been ‘Its not what you do, it’s how you do it.’ So you have to figure out, is this going to hurt me? My career? My family? My loved ones? Then I should not fucking do this.

Craving a return to a life he could trust, Parisyan soon sought the help of the man who two decades prior had first taught a young nine-year old how to subdue his inner anger through judo. A renowned trainer with ninth-degree black belt pedigree, Gokor Chivichyan recognized something in the troubled child. Under Chivichyan’s guidance, Parisyan grew to love the teachings of judo, channeling his fury into six Junior National belts and a shot at the 2004 Olympic trials.

Yet as the years passed and Parisyan’s troubles grew, he and Chivichyan began to drift apart. As Parisyan readily admits, the relationship could not have been repaired two or three years ago. But now the pair find themselves at peace as they work each week in camp. In a way, it’s just another step for Parisyan in the reclamation his own life.

“It’s experience man. It’s life experience,” Parisyan says as he readies himself on the eve of his fight in Brazil. “You learn a lot of things. I wasn’t the perfect man — I never said I was, and nobody ever is in this world — but people always deserve chances. I know I screwed up on my end in a lot of ways. I just miss fighting. I miss the life I had. But I just know this, the second you accept changes in your life is the second you’re growing up and getting mature.”

Parisyan is aware that these words have been said before, but never with such sincerity. Many observers have spoken about having the ‘old Karo’ back, but then again the ‘old Karo’ may not be an apt term. Parisyan has become something different. And now the climb back has become larger than himself.

“All of a sudden, I realized, for my career and my life, ‘you know what Karo, you’re not just fighting for yourself anymore. It’s just not all about Karo. You have people out there. You have fans. You have family. You have friends. All these people fight with you when you’re in that cage. That’s all I want to do. I want people to be happy.”

“People that really know me know that I have a good heart,” he continues. “I might rub people the wrong way, but it’s not intentional.”

Perhaps this is why Parisyan remains such a beloved figure. His fans are still out there, he believes. Individuals still holding on to faded memories of wars against Diego Sanchez and Nick Diaz, checking the results the day after an event in the hopes of seeing Parisyan on the left side of the fight-line.

Ultimately, Parisyan hopes to honor their loyalty. “All my true fans that like me, or love me, or support me, I love each and every one of them from the bottom of my heart, and I thank them for sticking by me. Believing in me. And if I do anything to disappoint them,” Parisyan vows, “I’m sorry.”

“I don’t know man, I just have everything turned around. I want to get back, I want to fight, and I want to show people I still…”

The fighter trails off before gathering his words, but there is a conviction that echoes in his voice.