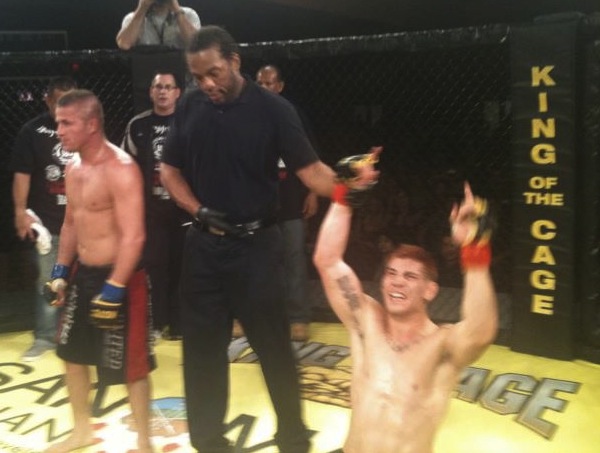 HyeFighter Jared “The Jackhammer” Papazian was successfull in his first title defense against previously undefeated Marvin Garcia at San Manuel Casino on Thursday, September 15th. The two combatants put on an amazing performance, and at the end, it was the HyeFighter who had his arm raised in victory.

Here is a play by play of the fight as reported by Spencer Lazara of mmainterviews.tv:

Papazian stuffs Garcia’s first takedown and reverses him against the cage. Garcia clearly doesn’t want to trade with Papazian once they break. Papazian keeps cage control pressing Garcia against the cage for the majority of the first round. Jared lands a few punches during one of the few striking exchanges. Round one clearly 10-9 Papazian.

Garcia comes out firing and lands in tight. Papazian shrugs it off and clinches. Garcia gets a judo throw, but Papazian pops right up and presses the shorter man against the cage. Papazian keeps control on the cage. Papazian gets a takedown but falls right into a guillotine. It looks deep, but Papazian stays calm and pops his head out after a good 20-30 seconds. Round 2 could go either way.

They clinch and each guy goes for a takedown. Garcia ends up on top but goes for an armbar as Papazian sneak out. Papazian pulls out and ends up on top. They make it back to their feet. Papazian lands some strikes but appears fatigued. Garcia gets a big takedown slam but can’t keep the champ on his back. Round three is also close and tough to call.

The champ secures a takedown a minute in and moves to half guard. Garcia makes it back to his feet and presses the champ against the cage. Papazian lands a left hook and a knee. They clinch and Garcia nearly gets a takedown but it’s stuffed. Round four 10-9 Papazian.

Garcia lands a punch taht bloodies teh champ’s nose, then nearly earns a takedown. They slug it out trading a few punches. Garcia gets a takedown, Papazian reverses it after using a kneebar submission and winds up in the challenger’s half guard. Papazian and shoulder strikes to try and make space. Herb Dean stands them up. Papazian lands a head kick, Garcia smiles. Papazian presses Garcia against the cage, landing knees and looking for a takedown. The round concludes with a flurry. 10-9 Papazian in round 5.