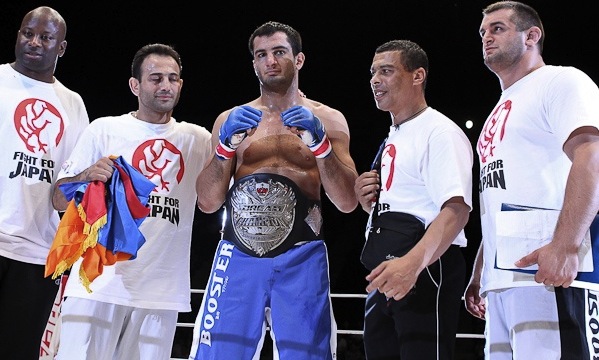 Lessons learned from fight against Jardine…..

HyeFighter Gegard Mousasi’s interview with Sherdog Radio:
Gegard Mousasi learned a lesson in his April draw against Keith Jardine, and he applied it in his July win over Hiroshi Izumi.

“I was just playing the MMA game,” Mousasi said of his strategy against Izumi during an interview on the Sherdog Radio Network’s “Beatdown” show. “I wasn’t there to just try to knock him out with every punch that I had. I think I performed much better in that one because I wasn’t looking for the knockout. I just was trying to win the fight.”

Mousasi stopped Izumi with punches 3:29 into the first round of their matchup at Dream “Fight for Japan.” The bout against Jardine, which took place at Strikeforce “Diaz vs. Daley,” ended in a disappointing draw.

“With Jardine I was just too aggressive, too much thinking of fighting and hurting him,” Mousasi said. “I understand that’s not always the way to win because the guy that’s trying to win, trying to take you down, score his points, then he will win eventually. I think I just need to fight smarter. It’s not all about who’s coming to fight. It’s more about who’s coming to win. That’s the difference and that’s what I’m understanding now a little bit.”

Still, the Jardine draw has stayed on his mind.

“I definitely think about it because if I had won that fight, I would have maybe got a title fight,” Mousasi said. “But unfortunately it ended in a draw, and so now I have to wait and … my next fight will decide if I get a title shot or not.”

Mousasi said he’ll be competing on the Dec. 17 Strikeforce card, but he doesn’t know his opponent yet. Expect to see improved takedown defense from him in the bout as a byproduct of fighting smarter.

“In training I’m doing very well in wrestling,” Mousasi said. “It’s not like people can take me down in training, but it’s the way I fight in the cage that makes me vulnerable for the takedowns.”

With a win in December, Mousasi could very well position himself for a shot at the Strikeforce light heavyweight title currently held by Dan Henderson. Of course, UFC President Dana White has said Henderson could move to the UFC. Mousasi wouldn’t mind if that happened, but he wouldn’t mind fighting him either.

“It’s not like we were very close friends, but I do respect Dan Henderson,” said Mousasi, who has trained with Henderson and had dinner at his home once. “He’s a very good person. He was very hospitable when we were there. If I had the choice, I would rather fight someone else, but it’s a sport. If the fight would happen, I would accept and so would he. It’s just a fight.”