HyeFighter Papazian On The Rise 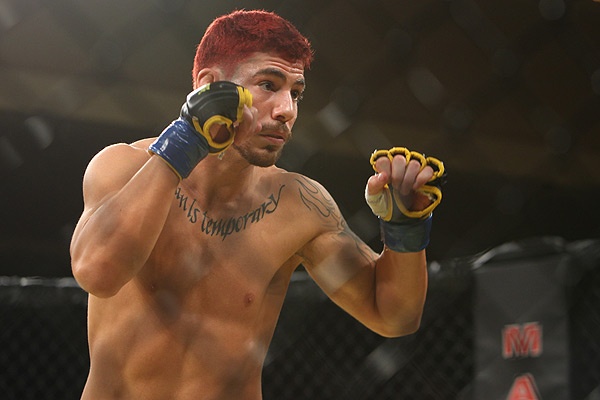 (PRESS RELEASE) — Mixed martial arts is today’s “it” sport. It’d be hard for anyone to argue that. As a result, more and more young athletes are getting into MMA. Amateur wrestlers are giving up dreams of Olympic glory in order to enter caged combat around the world. Former football players looking for new platforms to showcase their strength and physicality are getting into the sport. And other athletes are laying down their current sport of choice for a shot at all the money and glory that comes with being a top MMA fighter.

Yet, for some people, their motivation for getting into MMA is much simpler.

Jared Papazian (14-6) is a name you should remember. Currently the King of the Cage Bantamweight Champion, many consider the hungry young combatant to be the most talented 135er competing outside the UFC. And if his coach, former UFC lightweight Alberto Crane, has anything to say about it, that won’t be the case much longer.

“Of course Jared has what it takes to succeed in the UFC! There’s no question he can go all the way…he is a showman, and win, lose, or draw, he is always exciting and people love to see him fight!”

As for Papazian himself, his story on how he got into MMA is quite interesting. Just 23 years old, Papazian was born and raised in Southern California, and was a solid football and baseball player in high school. He did Tae Kwon Do as a child before graduating to Muay Thai when he was 16. Here’s his take on how he got into MMA:

“Back in high school, I was playing football as a sophomore,” explains Papazian. “After practice one day, a teammate was going through our stuff, and I got in a fight with him, which I won. A month later he got a bunch of guys together and they jumped me at a mall.”

“I was very angry, and I felt embarrassed. I got in a lot of fights in high school, and usually won, so this really caught me off-guard. I wanted to learn how to really fight. From there, I went into my first gym. My goal at first was to fight all those guys, but it never happened. But I fell in love with MMA, and really took it to the next level. I got into fighting as an amateur, did well, and then became a pro.”

Fighting is in Papazian’s blood. A cousin to UFC veteran War Machine, this “half-Armenian, half-mutt,” as he calls himself, splits his training between the gyms of Coach Crane and the famed Gokor Chivichyan. His training partners include UFC fighters Manny Gamburyan and Mac Danzig, as well as WEC vet Chad George. He’s competed against well-known fighters such as Abel Cullum, Jimmie Rivera, and Karen Darabedyan.

As a result, there’s no shortage of confidence with Papazian, and he’s just getting started. “I want to be the Mike Tyson of the bantamweight division. Dominick Cruz is on my hit list, and I’m getting that belt. Everyone freaks out about getting to the UFC, but I’m not going to be satisfied until I get that belt. I won’t be satisfied with just getting in. My goal is to get that belt and keep that belt. Everyone’s goal is to just make it to the UFC, but that’s not my goal.

“As for my style, I’m well-rounded, but since I’ve fought so much, I haven’t really focused on specific areas as much as I should. Now that I have some time off, I will. But mostly, I’m a standup fighter. Regardless, I’m always exciting, and I always give the fans what they come to see. They’ll never see me in a boring fight.

“I really believe I’m one of the best 135-fighters out there. I think I’ll have the belt within a couple years. I don’t think Cruz is that exciting…in fact, I think he’s boring. And I don’t think there’s anybody that’s really a threat in the 135-division like I am.”

The MMA world is about to find out just how good Jared Papazian can be.