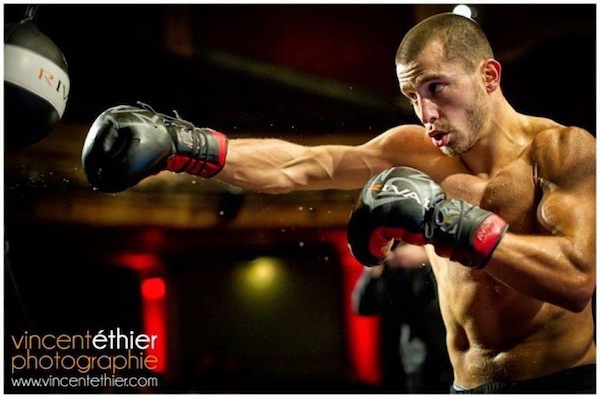 HyeFighter & Knockout artist David Lemieux (25-1 24KO) said all the right things Wednesday afternoon as the middleweight put the final touches on his preparations at a public workout session in advance of this Saturday’s local match-up against former world champion Joachim Alcine (32-2-1 19KO) at the Bell Centre in Montreal. There was the talk of how new trainer Marc Ramsay was just what the doctor ordered; how he had learned valuable lessons from his only defeat, a stunning knockout loss to the hands of Marco Antonio Rubio in April; how he is prepared for twelve tough rounds against a quality opponent in Alcine.

But scratch below the surface a little bit and it won’t take much to uncover the one man wrecking crew who scored 24 knockouts in his first 25 professional fights.

When asked by Fightnews if he felt like a bull anxiously waiting to break from the gate, Lemieux heartily agreed, “Oh yeah, a steaming bull, trying to get out of this gate, I miss it. I’ve been very anxious to get back into the ring, but I don’t want to rush into it too early, that’s why I wanted to wait a while before coming back, I wanted to be well prepared and make sure I’m prepared to fight in the ring and not make the same mistakes I made before.”

Those mistakes saw an experienced Rubio absorb everything the 22-year could throw before turning the tables in the 6th round, a place Lemieux had only been once before in his 4 year career. Rubio finished what he started in the next round and quickly stopped the young buck, or bull, sending him to his first defeat.”

In Alcine, Lemieux gets both an opponent with a questionable chin; Alcine lost his WBA junior-middleweight title when he was stopped suddenly by Daniel Santos in 2008 and was destroyed by Alfredo Angulo a year ago. But he also has an experienced opponent who has the capabilities to bring the youngster into deep water, a place Lemieux did not fare well in last time out.

“My last fight, I forgot it, it’s behind me now,” Lemieux told Fightnews, “I’ve changed the page, I made some mistakes and I’m not going to make those mistakes again. The whole nutrition aspect, the way I was eating, a lot of things have changed. My training methods, even my team, it’s all now in the past and now it’s a new beginning. What I’ve learned from yesterday makes me today a better fighter.”

While Lemieux says he is good shape and can handle going twelve round without a problem, don’t expect the powerhouse to take his foot off the accelerator at anytime during the Saturday’s fight. “I’m not going to change my way of fighting to prove to the public that I can do twelve rounds. I did my homework at the gym and now if I finish my exam an hour and a half before the bell rings, then it’s not my problem, I did what I have to do, to accomplish what I need to accomplish.”

Trainer Marc Ramsay also agrees, “When you have an opportunity to end a fight, you do it, that’s my philosophy in boxing, but the thing is that David right now is really prepared for twelve full rounds. A lot of people feel that Joachim can be knocked out, but I can’t count on that. I have to be prepared for everything that Joachim brings to a fight and that means boxing skills and everything and make sure that we cover everything. I can’t just sit back and expect a knockout.”