HyeFighter Mousasi Works His Way To A Victory 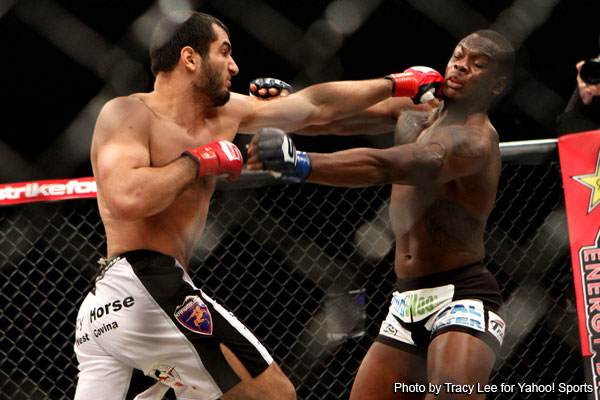 Maybe it was his loss to Muhammed ‘King Mo’ Lawal, but HyeFighter Gegard Mousasi was determined to show off his improved wrestling against Ovince St-Preux.

It was apparent in the opening moments that St-Preux, who took his biggest step up in competition with this fight, was slightly overwhelmed by the moment with a very slow start. Mousasi took advantage by swooping in for a takedown and almost grabbing a kimura.

St-Preux scrambled and got out, and that moment seemed to wake him up from his haze, but it didn’t prevent Mousasi for more of the same as the fight wore on.

Mousasi continued to grab takedowns while looking to improve positions, and even landed in the crucifix where he started to unload shots on trapped Ovince St-Preux, but the round came to an end before he could potentially end the fight.

The final round was a much more back and forth affair with St-Preux finally landing some big shots and attempting a D’arce choke, but Mousasi battled free. It appeared that by the end of the 15-minute war that Mousasi was struggling for air, which he explained after the fight ended.
“I don’t want to make excuses, but I was sick before the fight and it took a lot of my conditioning away. I think I did enough to win,” Mousasi said.

The win does move Mousasi back into place where he may have the chance to reclaim the Strikeforce light heavyweight title he held once upon a time. Of course, Mousasi would be happy for that chance, or if he has to fight another contender first, that would be satisfying as well.

“If I were to get the chance, I would definitely do it,” said Mousasi. “But there are some other contenders for the title so maybe an elimination fight with Mike Kyle, (Rafael) Feijao, King Mo and me.”

Some behind the scenes pictures: