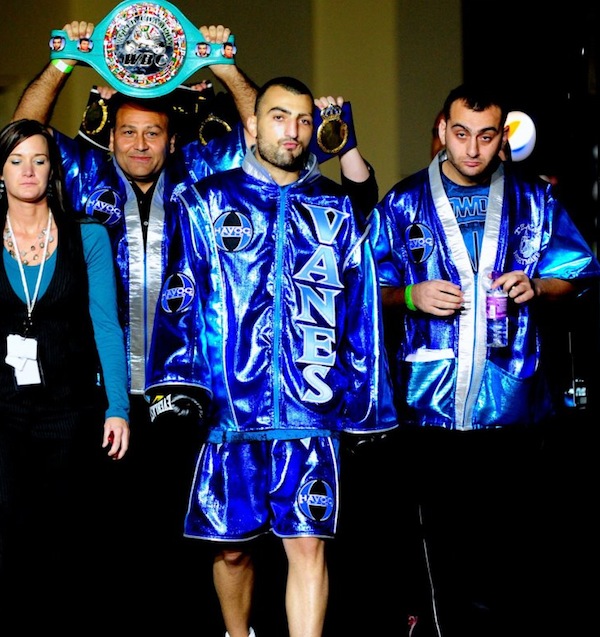 Story From: The Ring Magazine
Vanes Martirosyan’s HBO debut was a rousing success. He controlled his 12-round bout with Joe Greene at New York’s Yankee Stadium, handily winning on all three cards. The future was bright for the Top Rank junior middleweight, with many lucrative fights waiting in the wings. That was in 2010.

Fast forward to 2012 and he has yet to fight a second time on a premium network – and the man known as the “Nightmare” is quite frustrated.

THE RING’s No. 3 rated junior middleweight is scheduled to fight Troy Lowry (28-11, 17 knockouts) on February 4, the off-TV undercard of the HBO card headlined by Julio Cesar Chavez Jr. and Marco Antonio Rubio.

Martiroysan (31-0, 19 knockouts) of course would much rather be on the televised portion of the card fighting a fellow contender, rather than a 41-year-old journeyman.

“They’re just giving me this fight to stay busy, I don’t know what’s going,” said Martiroysan. “I’m just doing my job. I don’t pick my fights, I wish I could, but I don’t.”

The 25-year-old native of Armenia is perplexed by his inability to secure a meaningful fight.

“Maybe it’s my style, I don’t know,” said Martiroysan. “I have a new manager, Serge Martiroysan, who is also my uncle. After this fight, he promised me big things and 2012 is going to be my year. I’m going to go in there this fight and get a quick knockout and just look forward to the next one.”

The Glendale, Calif.-based fighter attempted to clarifiy the situation with Alfredo Angulo, wherein he was accused of ducking the Mexican brawler and simultaneously throwing away a chance to fight on HBO.

“With Angulo, they wanted me to go to Mexico, for a lot less money than they offered him,” said Martiroysan. “The only reason I turned down Angulo is because I was in the middle of trying to buy my contract out from Steve and I was getting a new manager. Now that I’m out of the contract with Steve I will fight Angulo in a heartbeat, anytime.”

The 2004 Olympian, who twice fought Andre Berto before making the team, advanced to within one fight of the medal round. He strongly believes his Olympic pedigree has greatly helped him in the paid ranks.

“It helps a lot because you get to see the world and you get to see different styles of boxing,” said Martiroysan. “The atmosphere helps you a lot in the pros.”

Martiroysan would love a third fight with Berto – this time without headgear and big gloves.

“I don’t think he’ll fight me, but if he wants to I would love that fight,” said Martiroysan of his former amateur rival. “He beat me close the first time, but the second time I beat him pretty bad and I hurt him also.”

Martiroysan is hoping to get two big fights in 2012.

“After this next fight, hopefully I get the winner of [James] Kirkland-[Carlos] Molina (on Mar. 24) and after that hopefully get Canelo,” said Martirosyan. “After that I want to fight all the top guys.

“I think Canelo is a good fighter, but it’s too soon for him to be champion, I think they’re doing a good job of protecting him. He’s getting better as the fights go on, but I don’t think he belongs up there.”

Martiroysan feels similarly about Kirkland, stating “Kirkland is good, he’s a good fighter, fights with his heart, but I think if he faces me it’s going to be the same thing that [Nobuhiro] Ishida did to him.”

The longtime denizen of Freddie Roach’s Wild Card Boxing Club is confident that when he finally gets his big fight, whomever he faces will have his hands full.

“I think I’m a boxer-puncher, I can adjust to any style,” said Martiroysan, who is co-trained by Roach and Edmond Tarverdyan. “I’m very unorthodox, it’s really hard for [opponents] because I have the European background, also. I have the style to bang or box.

“I’m trying to come into my own and I can do whatever I want in there, I’m very relaxed now.”