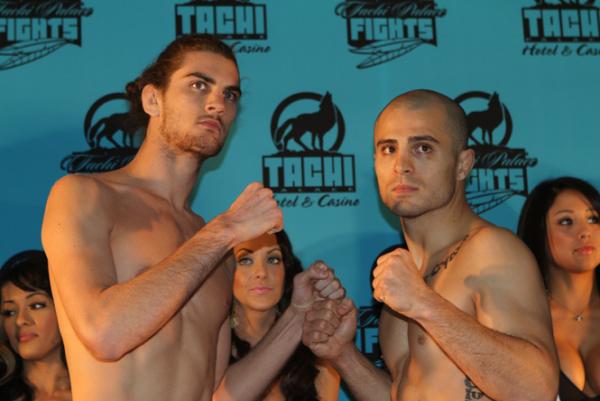 HyeFighter Georgi Karakhanyan (Pictured, right) was forced to pull out of his title defense against Micah Miller at Tachi Palace Fights 12 due to illness, and their featherweight title bout has been called off.

HyeFighters.com learned about this unfortunate turn of event a couple of hours before the fight was to start. The Karakhanyan-Miller fight was slated to co-headline the event, which takes place at the Tachi Palace Hotel and Casino in Lemoore, Calif., and streams live on Sherdog.com.

According to Karakhanyan’s manager, Kami Safdari, Karakhanyan likely contracted a stomach virus that kept the fighter up last night with nausea, vomiting, chills and a fever.

“Georgi was in no shape to fight,” said Safdari. “He was having abdominal spasms, and we almost went to urgent care. We thought it might have been food poisoning, but the commission doctor thinks it is a stomach virus.”

Safdari also expressed his disappointment at the bout’s cancellation on behalf of his fighter, asserting that Karakhanyan and his camp were looking forward to facing Miller for the title.

We were able to speak with Georgi’s camp and were told he is resting and is very disappointed.  He wanted to fight and was willing to go on.  His warrior spirit would not let him give up.  Everyone around him however, could see he was in no condition to fight.  We would like to wish Georgi a speedy recovery and are confident he will return soon.