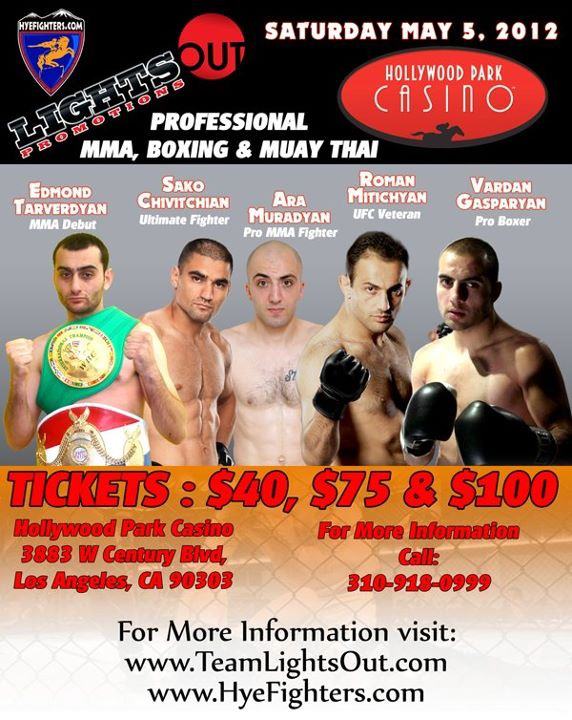 George Bastmajyan’s Lights Out Promotions will be putting on a a huge fight event at Hollywood Park Casino on May 5th that will have HyeFighters fighting in each and every bout.  This card will feature professional and amateur fights from all three combat sports, MMA (Mixed Martial Arts), Boxing and Muay Thai.

PRELIMINARILY the fight card is shaping up as thus, with ALL of these HyeFighters facing off against opponents to be determined soon:

There are a number of intriguing fights on this card. Namely two fights, Edmond Tarverdyan and Georgi Karakhanyan’s fights.

Edmond Tarverdyan is an accomplished, experienced and Champion Muay Thai fighter, who has been training and coaching professional elite boxers and MMA fighters like Vanes Martirosyan, Gabriel Tolmajyan, UFC’s Manny Gamburyan, and the newly crowned Strikeforce Women’s MMA Champion Ronda “Rowdy” Rousey, who will most likely also be in attendance as special guests of this show.  The other interesting fact is that Edmond also coaches and trains 2 other boxers who will also be fighting on this same card, Art Hovhannisyan and Azat Hovhanessyan.  I think this may be a first in history, where a coach fights in one sport and then corners two other fighters in a different sport on the same card of an event.  Think about it!!! Edmond will be making his MMA debut!!!

Georgi Karakhanyan, a newly crowned Thachi Placae Fights MMA Champion, will be making his professional boxing debut.  Georgi is an exceptional athlete and has been training very hard in stand up fighting for his MMA fights and has always wanted to box.  This will be his chance. The other 3 boxers on this card, Art Hovhannisyan, Vardan Gasparyan and Azat Hovhanessyan are exciting fighters that will bring some serious BANGING power.  Their fights are NEVER boaring.

Roman Mitichyan and Sako Chivitchian were both members of UFC’s The Ultimate Fighter TV show (in different seasons) and are exciting fighters that are accomplished in MMA.

The Muay Thai fighters are young HyeFighters that have participated in this Muay Thai / Kickboxing sport regularly.  You may not have heard of them before, but that doesn’t mean you will not hear of them in the future.  These young warriors will be making a lot of noise in the combat sports world in the future.

Remember, keep the MAY 5th Date OPEN, and come out to Hollywood Park Casino and support your HyeFighters.  12 HyeFighters on ONE card.  You can’t beat that!!!!!  There will be a lot of surprises and guest appearances you will not want to miss!!!!