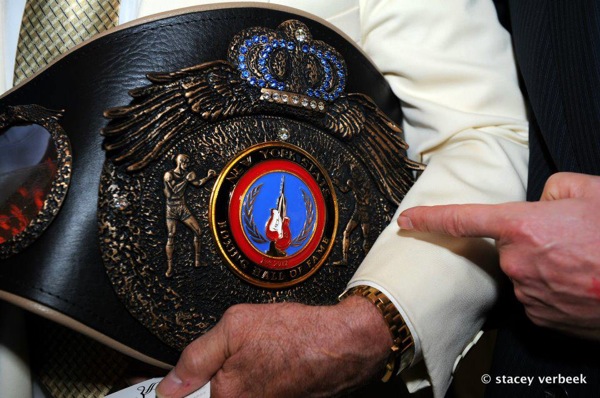 Every now and then we come across other fellow Armenians or Armenian owned businesses that have some very strong roots in the combat sports. Sartonk designs is one such company.  We had the pleasure of speaking at length with the president of Sartonk Designs, Mr. Edward S. Majian and learned a lot about his grandfather’s early involvement in the sport of boxing, not as an athlete, but as a tradesman.  We look forward to working and collaborating with Mr. Majian and Sartonk Designs on future projects.

Now, here is a bit about Sartonk Designs:

Sartonk Designs is a Sahaghian Family business. In the late 1970s, Ardash Sahaghian, a jeweler by trade and artist by birth, was invited to apply his range of skills to the redesigning of championship boxing belts.

Under the management of Mr. Philip Valentino, the fruits of Mr. Sahaghian’s labor is what we have all come to recognize as today’s modern boxing belts. Whether it be modifications to Ring Magazine belts, designing of title belts, or reproductions such as the John L. Sullivan belt, Mr. Sahaghian has contributed to 30+ years of boxing history.

Perhaps most recognizable of Mr. Sahaghian’s work – due to national TV – are the current WBA, WBO, IBF, and IBO title belts. Yet, his complete portfolio of work includes virtually all of the boxing models used today as well as various MMA title belts and specialty designs.

Today, Mr. Sahaghian is joined by his grandson, Edward S. Majian, who is the founder and president of Sartonk Designs.

While passionate about much more than the making of boxing belts, Majian is devoted to the craft and benefits from having been, “raised in and around the making of these belts.” He proudly continues Ardash Sahaghian’s legacy, alongside and under the eyes of the master craftsman.

Aside from producing the designs we all know and recognize, Sartonk Designs is devoted to the creation of new designs and the promotion of literacy and education within the boxing community and society at large.