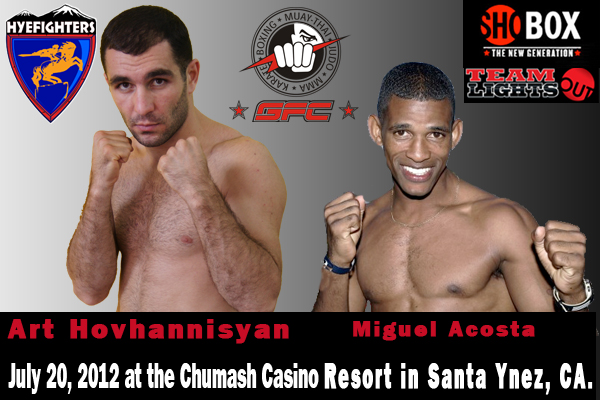 The bout will headline a “ShoBox: The New Generation” card and will take place at the Chumash Casino Resort in Santa Ynez, CA.

George Bastrmajyan, who manages and trains Hovhannisyan, initially reached out to HyeFighters.com in mid May to confirm “Lionheart” was to fight Acosta.

Acosta (29-5-2, 23 KOs) lost his last bout in October, a 12 round unanimous decision to interim world title holder Richard Abril. Acosta lost his world title belt six months prior to the Abril fight, as he was stopped by Brandon Rios in the 10th round.

Prior to his bout against Rios, Acosta had won 19 consecutive bouts in a row.

Hovhannisyan (14-0-2, 8 KOs) has not fought in almost a year, when he fought to a technical draw after the fourth round against former world title holder Cristobal Cruz. An accidental clash of heads opened a cut over an eye of Cruz and was recommended by a ringside physician not to continue.

Hovhannisyan’s most impressive victory to date was a sixth round knockout over Archie Ray Marquez last June, where Hovhannisyan dropped Marquez four times during the fight.

The rest of the card will be announced in a few weeks.