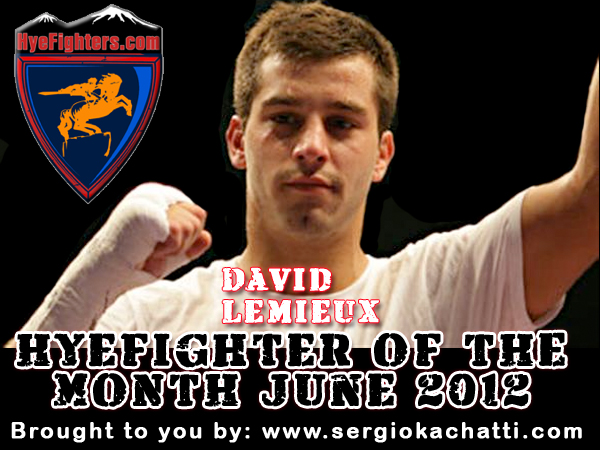 Congratulations to David Lemieux for being named the HyeFighter of the month for June 2012 for his 2nd round KO of Jaudiel “Negro” Zepeda at The Bell Centre in Montreal Canada.

HyeFighter Of The Month is sponsored by Sergio Kachatti Men’s clothing store who generously provides a free wardrobe to the winner of this award every month.

HyeFighter David Lemieux gets back on the winning track by scoring a KO victory against Jaudiel “Negro” Zepeda in the second round of their fight in Montreal Canada tonight.

With this win, Lemieux improves to 26 wins  (KO 25) and 2 losses (KO 1), but more importantly he gets his first victory after the back to back losses he suffered (the last loss was a controversial loos).  Lemieux was determined to get back to his winning ways.  From the opening bell, he attacked and forced his will on his opponent.  The KO artist is BACK!!!!!

It was supposed to be the durable opponent to give middleweight prospect David Lemieux (26-2, 25 KOs) and see what he had in later rounds. Jaudiel Zepeda (14-6-1, 11 KOs) though proved no match though for the powerful Lemieux who put the California fighter down for the count with a left hook to the body at 1:47 of the second round on Friday night at the Bell Centre in Montreal, Quebec, Canada. It snapped a two fight losing streak for the 23 year-old and was only the second time Zepeda has been stopped. Lemieux used a crisp sharp jab to set up his punches in the first round and sent his opponent tumbling to the canvas early in the next round with a big right hand to the jaw. Lemieux went right to work on the body of his opponent following the knockdown and had Zepeda down again in what was officially ruled a shove. The point was academic as Lemieux scored his 25th knockdown, 22 coming within the first two rounds, and all coming within the first five.